Festival of Russian Culture in London

Maslenitsa is a suitable and traditional occasion to celebrate Russian culture. Traditionally, Russians prepare pancakes with all sorts of fillings and coverings and to eat them with family and friends. Maslenitsa is bliny (Russian pancakes), popularly taken to symbolize the sun. 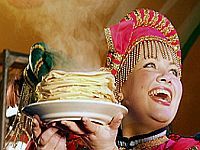 Festival of Russian Culture in London

Round and golden, they are made from the rich foods still allowed by the Orthodox tradition: butter, eggs, and milk. The occasion is marked on the week before the Orthodox Great Lent fast. As a pagan festival, it was meant to celebrate the soon ending of winter.

Maslenitsa is also celebrated with masquerades, snowball fights, sledding, riding on swings and plenty of sleigh rides.
An announcement was made that a Maslenitsa festival of Russian culture will be held in London on March 1. This festival will replace the annual Russian Winter Festival, which has been held in mid-January in London's Trafalgar Square since 2005. This year it was cancelled for financial and organizational reasons.

Maslenitsa is due to go ahead from 13:00 to 18:00 GMT at Potters Fields, a park by the Thames, beside Tower Bridge and City Hall.

"The festival will include various music, dance and theater performances by well-known and promising Russian performers, as well as some local groups," a statement made by event organizers said.