Brazil’s Miss World finalist has her hands and feet amputated

Twenty-year-old Brazilian model Mariana Bridi da Costa, who was supposed to represent her nation at Miss World beauty pageant, had her hands and feet amputated because of a severe urinary infection, AFP reports. 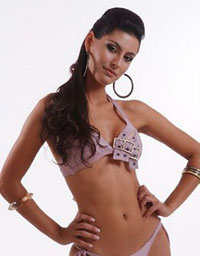 Brazil’s Miss World finalist has her hands and feet amputated

The operation under general anesthesia with the use of artificial respiration took place at Serra’s hospital, in the south-east of the Brazilian Province of Espirito Santo.

The model was diagnosed with the blue pus bacillus bacterial infection (Pseudomonas aeruginosa), which often leads to lethal outcomes. The blood poisoning in her limbs triggered blood circulation disorder, and doctors eventually decided to amputate the woman’s hands and feet.

Bridi’s boyfriend Thiago Simoes told reporters that she had fallen ill on December 30, although she was mistakenly diagnosed with kidney stones.

The infection was spreading very quickly, and the woman had to return to hospital for further examination, which revealed her real condition.

Bridi’s father, Agnaldo da Costa, told reporters that it was the tragedy of her whole life.

The Miss World pageant is the oldest surviving major international beauty pageant created in the United Kingdom by Eric Morley in 1951. Alongside with its rival Miss Universe and Miss Earth contests, this pageant is one of the most publicized beauty contests in the world. The telecast of the final competition is the world's largest live annual beauty pageant television event with global viewers.

The winner spends a year traveling to represent the Miss World Organization and its various causes. Traditionally, Miss World lives in London during her reign. The current Miss World is Ksenia Sukhinova of Russia.

Miss World started as the Festival Bikini Contest, in honor of the recently introduced swim wear of the time, but was called "Miss World" by the press. It was originally planned as a one-off event. Upon learning about the upcoming Miss Universe pageant, Morley decided to make the pageant an annual event.

Opposition to the wearing of bikinis led to their replacement with more modest swim wear after the first contest. In 1959, the BBC started broadcasting the competition. The pageant's popularity grew with the advent of television.

In the year preceding the global finals, each delegate must win her national title or a specially designated Miss World national preliminary. Miss World's national preliminaries are conducted by their license-holders, who hold the franchise to use the "Miss World" name in their country. The annual final is typically a month long event, with several preliminary galas, dinners, balls and activities, culminating in a globally telecast final show in which the field is narrowed to between 15-20 delegates.