From the very beginning the U.S. dollar has been having some kind of destructive influence on the world's financial system. The people, who created first U.S. dollar notes, placed some mystical signs and symbols on them. The financial crisis may force the USA to issue a new currency because of those signs. 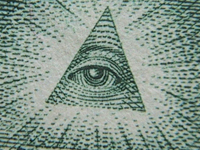 Experts say that the next four years may define the future of the U.S. currency. The number of problems in the world's financial system increases every day. The U.S. budget deficit has set a new record during the recent three months as it reached the amount of 485 billion dollars. Trying to solve their financial problems, the Americans automatically create a strong disbalance in the financial systems of other countries.

The Americans are very pragmatic. If they come to conclusion that the collapse of their national currency will help them get rid of their international debt, they will do it immediately, - says Alexander Baranov, an expert with the FSB Academy.

There are a lot of examples of such actions in world history. Germany chose to proceed so after the First World War. The link between the national currency and gold was broken, which caused one of the most serious inflations in German history.

It is not actually difficult to find reasons to change the U.S. currency. For example, a union between Mexico, the USA and Canada can be created instead of the USA. This union will be based on the new currency called Amero, - says Alexander Baranov. The situation will be the same as in Europe.

Any changes in the U.S. currency system will lead to changes in other countries. The signs, the symbols and even the size of U.S. dollar notes indicate the terrifying role that the dollar may play soon.

Everyone is aware of the sign depicted on the back of the 1-dollar-note - the all-seeing eye. Many sacred books including the Koran say that one of the distinctive features of Antichrist include the following: "It has one eye which looks like a grape berry."

The fact that the width of the note makes exactly 66.6 millimeters (Satan's number) may seem to be the most striking one. It is worthy of note that the all-seeing eye appears on Ukraine's 500-hryvna note too.