The Orthodox Christians celebrate Epiphany Day (also known as Theophany) on January 19, one of the 12 most important religious holidays. The day is also known as Baptism of Christ and celebrates the revelation of God in human form in the person of Jesus Christ. 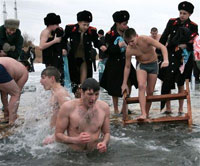 All Orthodox churches hold the Divine Liturgy of St. Basil and perform the Great Blessing of Waters this day. Following the Divine Liturgy, the clergy and people go in a Crucession (procession with the cross) to the nearest body of water, be it a beach, harbor, quay, river, lake, swimming pool, water depot, etc. (ideally, it should be a body of "living water"). At the end of the ceremony the priest will bless the waters.

The water that is blessed on this day is known as "Theophany Water" and is taken home by the faithful, and used with prayer as a blessing. People will not only bless themselves and their homes by sprinkling with Theophany Water, but will also drink it. The Orthodox Church teaches that Theophany Water differs from regular holy water in that with Theophany Water, the very nature of the water is changed and becomes incorrupt, a miracle attested to as early as St. John Chrysostom.

It is strongly recommended not to store Theophany Water or dilute it with anything. It is also forbidden to argue, commit indecent actions or thoughts when taking and accepting such water for it will lose its holiness thereon.

On this day Orthodox priests also bless parishioners’ homes. They read short prayers in each home and then walk through the whole house, gardens, etc, blessing everything around with the holy Theophany Water.

The ritual of swimming in ice-cold waters was saddened with an incident which took place in the city of Tver, some 150 kilometers off Moscow. About 1,000 people came to the bank of the Volga River in the city center. The people descended on the ice which turned out to be not thick enough to bear the mass of so many people. About 30 people, including women and children, found themselves submerged in the ice-cold water of the river. Emergency personnel and police officers rescued everyone in mere minutes. Twenty-four people asked for medical help; no one drowned in the incident.