Bird Terrorists Knock Down US Plane

There were 155 passengers and crew on board US Airways Flight 1549 when the plane went down in the Hudson River. It is believed there were no fatalities and no serious injuries, although many passengers appeared all wet in the freezing temperature waters in which a human being can only survive for only about an hour. Roosevelt Hospital later reported treating four individuals from the plane for hypothermia. 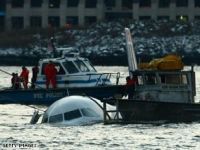 Bird Terrorists Knock Down US Plane

Passengers were seen standing on the wing after exiting the aircraft. Passengers reported hearing a boom just minutes into the flight, feeling the plane shaking, seeing flames coming out from the engines, smelling smoke and being told to brace for an emergency landing.

The plane had just taken off from LaGuardia Airport en route to Charlotte, N.C., when the crash occurred in the river near 48th Street in midtown Manhattan New York. It is believed that both the A-320 aircraft engines were struck by a flock of geese or possibly other birds. Pilots reported a bird strike to aircraft controllers and witnesses on the ground also reported seeing birds strike the aircraft.

Doug Church, spokesman for the National Air Traffic Controllers Union, said that the pilot reported a "double bird strike" about 30 to 45 seconds after takeoff and said he needed to return to LaGuardia. The second choice landing, in Teterboro, New Jersey, also had to be aborted. More than 56,000 bird strikes were reported to the FAA from 1998 to 2004. An Airbus A320 has 150 seats -- 12 in first class and 138 in economy.

The pilots were credited with excellent work in guiding the plane down after its engines were disabled. The plane missed a bridge by just 900 feet gliding without power. The plane was observed by an ABC commentator and other observers who said that it seemed to be flying unusually low. Then it appeared that the pilot was using the Hudson River as a landing strip for a controlled landing. At 3:03 P.M. (15:03) Eastern Standard Time, the plane was 6 minutes into the fight when it hit the water. Once on the water, the plane floated at about window level, allowing passengers to be rescued by New York Waterworks, Coast Guard and other boats.

Engine blades are torn apart in such incidents causing total engine failure, and they are particularly vulnerable during takeoffs when the engines are going top speed. It is not unusual for birds to strike planes. Airbus is capable of flying on just one engine. It is not quite as usual for them to involve both engines, however. This was clearly a case of avian terrorism. There are no reports about arrests or recovery of the bodies of the avian terrorists occurring.