Our Santa Claus is better than yours

Saint Nicholas, a most holy of men, The Wonderworker, who has been venerated by the Orthodox Church since the 4th centaury A.D. is the core, the basis of the Santa Claus myth. As the Christian faith spread into the Germanic and Norse lands, the local traditions were supplemented to Christianize the population. However, in the supplementation, many aspects and characteristics were absorbed. One such example is the Christmas tree, which actually dates back to Germanic nature worship. 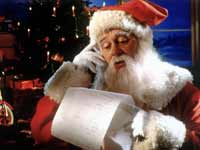 Our Santa Claus is better than yours

Santa Claus began to take on various pagan trappings also. His place of residence was originally set in Lapland and only later, in the American version moved to the North Pole. I mean, really folks, its bad enough he lives in the frozen tundra, but do you really want to place him on an ice cube that the American greens are melting with their hot air?

The worst part of all this, of course, is that Saint Nicholas, the patron saint of children, sailors, fishermen and falsely accused has been deformed into the status of mindless, Christless consumerism. But things are what they are and in the end, the Russian Santa Claus (also called Ded Moroz--Grandfather Frost) is much cooler than the American one. Let me explain.

All myths and symbols evolve with their cultures over the years. The modern, fat and jolly American Santa Claus was created by Sears to sell things. He's hawked a lot of stuff over the years and considering a large part of it has been junk food, it is no wonder that he's way over weight and probably suffering from a host of medical ills. He may seem jolly, but how many fat people are actually “happy”? Not many, most carry deep seeded problems.

Of course, it does not help that he is surrounded by diminutive little people who are fashion impaired or that his wife is equally over weight and out of touch with the modern world.

Enter the eastern Slavic Santa Claus, who under the Soviet State was transformed into Ded Moroz and who’s name as Santa Claus is slowly coming back. The first thing one notices is that he’s slimmer and fit. Yes, this is an elder of the modern world, one who does not let himself go to pot but keeps himself trim.

Next you will notice his lovely assistant Snegurochka (Snow Girl). Sure some say it is his granddaughter and sure she is young enough to be. Personally, though, I think she’s what puts the twinkle in our Santa’s eye, the sprint in his step and the fit in his belly and why not?

Lastly one notices that our Santa Claus brings his presents on New Years, which is the correct day to give presents and celebrate new stuff. Christmas is a holy day for us Orthodox Christians and we prefer not to have the meaning of the birth of our Lord to be blared out by some fat, questionably jolly, Western salesman and his fashion challenged little people.