The UFO phenomenon never existed in the former USSR, at least in the official records. There were numerous stories about unidentified flying objects which could be heard from susceptible individuals, but Soviet cosmonauts never said anything on the subject, although they had a lot to share. 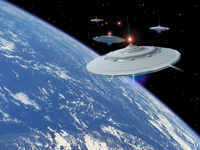 Former Soviet cosmonaut Vladimir Kovalenok appeared at a press conference devoted to unusual and anomalous phenomena in space. He said that he had witnessed something inexplicable during his work on board the Salyut orbital station. The cosmonaut said that he once saw a strange object on Earth’s orbit. He asked his partner, Viktor Savinykh, to fetch a camera. While Savinykh was trying to find the camera, the object exploded in front of Kovalenok’s eyes. The object split into two parts and had something like a bridge connecting those parts. The dumbbell-like object disappeared before the other cosmonaut was ready to photograph it. A strong radioactive emission was registered on Earth soon after the explosion of the mysterious object.

Kovalenok said that many of his colleagues had witnessed something unusual on a number of occasions, but they decided not to bring those issues to the public attention.

Pilot Pavel Popovich was on a flight from Washington to Moscow in 1978. The plane was flying at the height of about 10,000 meters, when he noticed a triangular luminescent object flying on the same trajectory with his aircraft. The speed of the triangle was higher than that of the plane – more than 1,700 km/h, whereas the jetliner was flying at 1,100 km/h.

Cosmonauts Gennady Strekalov and Gennady Manakov saw a bright spherical object appearing in the cloudless sky above Newfoundland in 1990. The sphere disappeared without a trace ten seconds later.

In 1991, Musa Manarov was observing the module with the new crew nearing the Mir Space Station, filming the process on video camera. He suddenly saw an antenna-like object separating from the module. He informed the cosmonauts inside the module that something had undocked from them. Nevertheless, it never became possible to identify the object, although it was filmed on camera.

It goes without saying that cosmonauts informed their governing bodies of all those and many other strange incidents. All of the stories were most likely documented and subsequently classified.

Cosmonauts may often witness other inexplicable events happening in space, Vladimir Kovalenok said. A tape recorder switched on by itself and started playing the crew’s favorite film on the orbit once, Kovalenok said.

Psychologists often warn cosmonauts prior to their space missions that they may experience a phenomenon known as the altered state of consciousness. A Russian cosmonaut said in 1994 that he and his partner had numerous visions when they were working on board the Mir station for six months. It seemed to them that they were turning into weird creatures – animals and even humanoids of extraterrestrial origin.