Three children – two boys and one girl – arranged a brutal massacre at a zoo in Rostov-on-Don. The children beat a kangaroo and three gulls to death. Three other birds stay in severe condition. 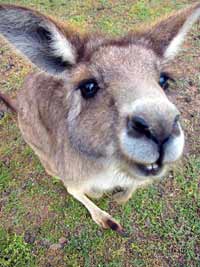 The law-enforcement agencies of the Rostov region intend to institute criminal proceedings against the three children in accordance with Article 245 of the Russian Penal Code (cruelty to animals).

All the participants of the zoo slaughter are between 10 and 12 years of age and come from dysfunctional families, the police said.

Zoo employees found the dead body of a small female kangaroo in one of the enclosures of the zoo on October 18. Experts later determined that the animal had been beaten to death with sticks. The sticks were found near the enclosure.

Three mutilated sea gulls were found at the zoo the next day. One of the birds had its wings broken, the two others had their heads smashed.

“We were certain that it was done by homeless people. It could never occur to anyone that the animals had been slaughtered by children,” a legal expert of the zoo said.

The kangaroo gives birth to the young at a very early stage of development. The newborn climbs into the pouch after birth and attaches to a teat for six months. The female kangaroo that was slaughtered at the Rostov zoo was a baby that crawled out of its mother’s pouch in the beginning of summer.

The zoo administration filed a police report in several days only, after the results of its own expertise showed that the animals had died violent deaths.

Three underage individuals – two boys and a girl – were detained at the zoo on October 22. The children confessed that they had killed the kangaroo and the three sea gulls.

The children were detained by accident, when a zoo employee saw them throwing bottles at a pelican. The man caught the girl and asked her straight off why they had killed the gulls. The girl was taken aback and said that they supposedly intended to eat the birds afterwards.

The employees took the children to the zoo café and treated them to sandwiches. The honest children did not deny or conceal anything. They said that they originally wanted to play with the little kangaroo, but later wished to hurt the defenseless animal. The two 12-year-old boys climbed into the open-air cage of the animal, whereas the ten-year-old sister was keeping a look out. The boys started to cane the kangaroo on its head and chest, and the animal died of injuries.

The parents of the three children are not addicted to either alcohol or drugs, the police said. The 12-year-old boy Nikolai and his 10-year-old sister Natasha have four other siblings. Their father is employed, whereas their mother is a housewife.

The third boy, named as Sergei, produces an impression of a mentally unbalanced child. His mother works as a washer-woman. The boy was expelled from school two years ago due to his inadequate behavior.