Hundreds of people – pet owners, their helpless children or just passers-by - fall victims to domestic animals every year. A terrible incident took place in the south of Moscow last weekend. 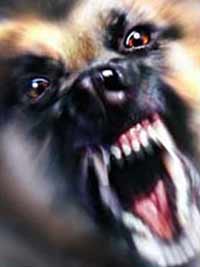 The body of a 66-year-old pensioner, severely picked by his dog, was found in the man’s apartment. The man was living in the apartment with his pet, a German police dog, the man’s wife had passed away a while ago. The man’s relatives were living in Belarus – he was always in touch with them over the telephone. The pensioner suddenly stopped answering phone calls two weeks ago. The man’s niece arrived in Moscow to see what happened to her grandfather.

Nobody answered the door, when the woman came to her grandfather’s apartment. The woman called the police.

The police pried the door open and were stunned to see the walls covered with blood stains. The dog, its muzzle snout all covered with blood, rushed to see the police in. The dog projected forward to attack the officers, so they had to shoot the rabid animal dead. The picture that the officers saw in the apartment afterwards became a real shock even for experienced investigators.

Remnants of the elderly man were found in one of the rooms. The mutilated body was very hard to recognize. Human bones were scattered all over the apartment. The officers originally thought that the dog attacked and killed the master in a fit of aggression. The version seemed to be believable taking into consideration the dog’s behavior and the quantity of blood in the apartment. However, experts determined later that the man had died of a heart attack two weeks ago.

The hungry police dog had nothing to do but to eat the corpse of its owner. It is an open secret that a dog can live with no food for about 20 days. However, the German shepherd did not hesitate to devour the flesh of its master.

In 2006, a tosa-inu dog attacked an eight-year-old girl in Moscow. The little girl, a second-grader, died at hospital over severe injuries.

Many countries practice certain restrictions for those owning fight dogs. Such breeds include bull terriers, boxer dogs, German shepherds, Staffordshire terriers, Argentine dogs and some others. People all over the world finally begin to realize that owning such a dog can be compared to owning a weapon.

The authorities of New Zealand had to take similar measures in 1997 after a series of accidents in the country. Pit bull terriers, Brazilian Filas and some other dogs of the dangerous breeds had to be exterminated all across New Zealand.

France banned fighting dogs in 2001 and ordered to sterilize all pit bull terriers in the country. All fighting dogs were banned in Great Britain in 1991. However, the British do not categorize pit bulls as fight dogs: the lethal breed continues to prosper there.