Iconic Soviet plane destroyed in the heart of Moscow

Tu-154, a passenger jetliner exhibited at Moscow’s All-Russian Exhibition Center (known for its Russian initials as VVC and formerly known as VDNKh) 30 years ago, was demolished Saturday. Other exhibits – the Yak-42 aircraft and the Vostok rocket – will apparently have to suffer the same fate. The people visiting the exhibition complex were indignant about the way the Tu-154 was destroyed. 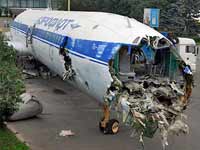 Iconic Soviet plane destroyed in the heart of Moscow

Many of those visiting the Russian Exhibition Center on September 13 could see an excavator destroying the Tu-154 jetliner, a renowned exhibit at the complex. The plane was cordoned by police officers, whereas several trucks were prepared to take the debris of the plane out of the exhibition center.

Many Muscovites view this plane as a symbol of the VVC – something they remember from early childhood. The people do not understand why the authorities decided to demolish the iconic aircraft in broad daylight on Saturday. Many said that they had an impression that the VVC directors deliberately intended to hurt the feelings of many Muscovites with their decision.

The Moskovsky Komsomolets newspaper wrote that the liner was destroyed due to its severe wear. The real-size models of Tu-154 and Yak-42 aircraft appeared at the VDNKh in the middle of the 1960s. The directors of the exhibition center decided to ruin the plane because it would be too expensive to take it out of the center undamaged.

Eyewitnesses of the event said that they could see elderly people in tears as they watched the passenger liner being destroyed.

The press secretary of the VVC, Oleg Gladyshev, stated in May of this year that the models of Soviet passenger planes would not be removed from the exhibition center.

The Tupolev Tu-154 is a Soviet medium-range trijet airliner, similar to the Boeing 727 and of particularly rugged design. It remains the standard airliner for domestic routes in Russia and other states of the former Soviet Union and to a lesser extent in Eastern Europe and Iran. The mainstay of Russian airlines for several decades, the Tu-154 has carried about half of all passengers flown by Aeroflot and its subsidiaries, or approximately 137 million passengers per year, and has been exported and operated by at least 17 foreign airlines. Designed to cope with unpaved and gravel airfields, the plane often operates in extreme Arctic conditions and although production has ceased, there have been requests for resumption of assembly. The Tu-154 often approaches Mach 1 speed making it one of the fastest commercial jets in operation.