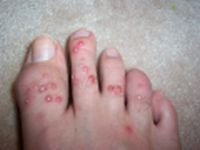 SEMINOLE COUNTY, Florida: Tropical Storm Fay left much of northeastern and central Florida covered with flood water as it stalled over the state for days. The deadly fire ants were in a colony floating on floodwaters that were spawned by Tropical Storm Fay.

Seminole County authorities announced that a victim had died in a hospital from anaphylactic shock, an allergy to the ant bites he sustained. A flooded road prevented a quick rescue when Bob Cunningham, in his 60s, went into anaphylactic shock. He made it to the hospital, but died from his body's reaction to the ant bites. Death by fire ants may seem difficult to believe, but the tiny insects killed the man in Chuluota, Florida as he walked his dog outside his home located just off Old Christmas Road. Apparently the man was swarmed when he stepped in an ant pile.

One should consider oneself lucky to never have been bitten by fire ants. These types of ants are found throughout the United States, especially the southern states. Fire ants can also be found in South America, Australia, the Philippines, Taiwan, and China.

Fire ant nests are dome-shaped and sandy looking, they look like a pile of sand, and can be quite large: up to 40 cm high by 35 cm in diameter and a meter or deeper. They nest in moist soil areas. The mounds can normally be found next to objects on the ground such as wood, rocks, paving stones and bricks. They can also be found in sunny open areas such as lawns, uncultivated farmland or pastures, and along the side of roads, rivers and ponds.

These highly aggressive ants will swarm in a few seconds. When a fire ant bites, it first grabs the skin with its mandibles. This anchors the ant so that it can thrust its abdominal stinger and venom into the victim’s skin. A fire ant delivers a very painful and burning sting to its victims. This fiery burning pain is intensified because of the likelihood of multiple bites or stings. It is for this reason that the fire ant got its name.

The problem is that fire ants do not bite or sting only once. In fact, one fire ant will sting relentlessly. This multiple stinging or biting (7 or 8 stings) is usually in a circular pattern around the area where the fire ant anchored itself. In addition, encounters with fire ants usually involve several or even up to hundreds of ants. Therefore, the amount of fire ant bites in an attack can be significant with each one of those fire ants stinging multiple times.

Symptoms of an allergic reaction from a fire ant bite are similar to stings from other insects. These include flushing of skin, hives all over the body, swelling of the face, eyes, tongue, lips and throat, slurred speech, chest pains, headache, sweating and nausea, feeling faint and wheezing or difficulty breathing (anaphylaxis). These systems usually occur immediately or within an hour of the stinging. In rare cases, such as that of Mr. Cunningham, serious reactions to fire ant bites may occur several hours after the attack.

Individuals who know they are allergic to insect stings should have an epinephrine auto-injector such as an Epi-Pen with them. The Epi-Pen should be administered if the signs of an allergic reaction become evident. After injection, the victim should be transported to hospital immediately. At the hospital more epinephrine may be given as well as oral steroids.

Because of the incident, the Seminole County Florida Fire Department set up a temporary rescue station in western Chuluota. Lake Mills Road, the quickest rescue route for that area, is so badly damaged it will likely be closed for some time and it will pose an obstacle to anyone needing emergency assistance of any type.