The opening of the center for surrogate mothers in Poland has sparked controversy. The Catholic Church stands strong against the initiative, although many Polish citizens support the opening of the first-ever center in the country. The center has already released the price list for its services and even obtained its first clients, the Noviye Izvestia newspaper reports. 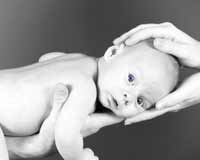 Thirty-seven women have already addressed to the center offering their healthy bodies to help those who cannot enjoy the happiness of biological parenthood. Specialists of the center pay first priority to addresses of surrogate mothers and infertile couples so that a surrogate mother would not come across her child in the streets afterwards.

Surrogate mothers are obliged to undergo a series of profound medical examinations, which include tests for genetic diseases. In addition, the women will have to provide special medical certificates to prove that none of their relatives suffer from any genetic diseases either. To crown it all, they undertake not to drink alcohol or smoke tobacco during pregnancy.

Potential parents in their turn must guarantee that they will adopt a baby in any case, whether it is born as a healthy baby or not. A surrogate mother also undertakes not to have any claims after the birth of a baby: a woman signs a 70,000-dollar promissory note which is deposited at the center until the baby is delivered to adoptive parents.

Surrogate motherhood has become a subject of vivid discussions in Poland recently. Recent opinion polls conducted in the country showed that the majority of the Poles approve the initiative, although the Catholic Church vehemently opposes it. Clergymen believe that it is not a surrogate mother, but God, whom childless people need to address with prayers.

Organizers of the center say that they decided to take up the initiative because of the serious demographic situation in Poland. To make matters worse, about 1.5 million Polish families cannot have children.

The parliament of Poland does not seem to be able to pass the law about artificial fertilization, hesitating between the official stance of the Roman-Catholic Church and the need to help citizens of Poland.

Having another woman bear a child for a couple to raise, usually with the male half of the couple as the genetic father, is referred to in antiquity. For example, chapter 16 of the book of Genesis relates the story of Sarah's servant Hagar bearing a child to Abraham for Sarah and Abraham to raise.

Attorney Noel Keane is generally recognized as the creator of the legal idea of surrogate motherhood. However, it was not until he developed an association with physician Warren J. Ringold in the city of Dearborn, Michigan that the idea became feasible. Dr. Ringold agreed to perform all of the artificial inseminations, and the clinic grew rapidly in the early part of 1981. Though Keane and Ringold were widely criticized by some members of the press and politicians, they continued and eventually advocated for the passage of laws that protected the idea of surrogate motherhood. Bill Handel, who is a partner in a Los Angeles, Surrogacy firms, also attempted to have such laws passed in California, but his attempts were struck down in the State Congress. Presently, the idea of surrogate motherhood has gained some societal acceptance and laws protecting the contractual arrangements exist in eight states.

In the United States, the issue of surrogacy was widely publicized in the case of Baby M, in which the surrogate and biological mother of Melissa Stern ("Baby M"), born in 1986, refused to cede custody of Melissa to the couple with whom she had made the surrogacy agreement. The courts of New Jersey eventually awarded custody to Melissa's biological father William Stern and his wife Elizabeth Stern, rather than to the surrogate Mary Beth Whitehead.

Compensated surrogacy arrangements are illegal in Washington, Michigan, Utah, Arizona, New Mexico and New York. Additionally, four states in the US have held that such contracts, while not illegal, are unenforceable. California is widely recognized as one of the friendliest jurisdictions for parties desiring to enter into a surrogacy arrangement. There are many states at the present time that issue pre-birth orders placing the correct parent names on the baby's birth certificate.

Compensated surrogacy is legal in Oregon, Texas and Arkansas. Texas requires the surrogate mother to be a resident of Texas. Arkansas does not require surrogates to be residents. Intended parents and surrogates resident in any state of the USA can enter into a legal surrogacy arrangement in Arkansas. Provided the child is born in Arkansas and that financial considerations are dispensed from Arkansas the contract will be recognized by Arkansas courts and upheld.

Fertility treatment in Texas and Arkansas is a fraction of the cost in California. California is the US state closest for infertile couples from Europe and Australia who wish to enter into third party reproduction arrangements to travel.