The image of wealthy Russians on their holidays in Europe has been associated with eccentricity for quite a while. Rumor has it that they can order a 10-thousand-dollar bottle of wine in a restaurant and leave the bottle on the table after drinking only one glass, Italy’s La Stampa reports. 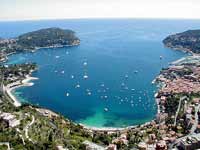 Russians can rent a Ferrari to ride along Promenade des Anglais in Nice, France. Many wealthy Russians, who keep the origin of their fortune a secret, come to the south of France to stay in luxury hotels where they can pay up to 35,000 euros a night. The new generation of Russians has come to realize that a person who has money has a right for everything.

A Russian billionaire, who owns a Beaulieu-sur-Mer villa, was very unhappy about trains making noise not so far from his luxury home. He sent his representative to local authorities with an offer to move all the railways and trains somewhere to another place. The billionaire offered 100 million euros for that.

Sergei Pugachev, known as a Kremlin banker, purchased Hediard (a grocery house found in France in 1854, the leading maker of luxury goods) to make it an icon of French cuisine abroad. Nikolai Tsvetkov, a former Red Army officer, became the leading maker of china in France. Russians acquire French castles, vineyards and cognac-making companies. Russians purchased De Montesquieu Hotel for 142 million euros. The former building of the French ministry for cooperation will become a luxury residence of a Russian oligarch.

Saint-Jean Cap Ferrat in southeastern France is known for its villa built by Baroness Béatrice Ephrussi de Rothschild. A Russian oligarch decided to raise the height of the villa to win the additional 500 square meters. A local mayor declined the suggestion and said that no other building in the area could be higher than the lighthouse built during the time of Napoleon III of France. The tycoon instantly offered 15 million more euros to raise the height of the lighthouse too, not to violate the law.

Another Russian banker outfitted his villa in Saint Jean with a modern video surveillance system, which any army base could be proud of. Saint Jean is not conspicuous for a wild outburst of criminality. The banker simply wanted to watch roses blossoming in his Saint Jean villa online, sitting comfortably in his Moscow office.

Wealthy Russians will never buy a villa in the south of France for the price of 15 million euros. The “low price” will make them think of the villa as a miserable hut. The price of 110 million euros for the same villa will seem to be ok with them, though.