The largest diamond in the known universe has a new owner, or more correctly, its first owner. Frank Speener, a 53 year-old graphic artist and photographer from Peoria, Illinois, filed a formal declaration of legal claim with the United Nations to become the recently discovered super mineral’s first owner. While Speener filed his claim in July of 2007, he withheld news of the announcement pending an exhaustive investigation of any prior claim. 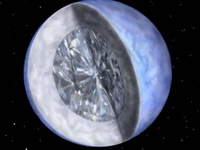 The diamond, estimated at 10 billion trillion trillion carats (that’s a one followed by 34 zeros) and measures 2,500 miles across, is actually the crystallized white dwarf star BPM 37093 located approximately 50 light years from Earth in the constellation of Centaurus, next to the Southern Cross.

A white dwarf is the hot core of a star, left over after the star uses up its nuclear fuel and dies. This particular object is made mostly of carbon and is coated by a thin layer of hydrogen and helium gases. For more than four decades, astronomers have thought that the interiors of white dwarfs crystallized, but obtaining direct evidence became possible only recently.

Speener is basing his claim in part on the Outer Space Treaty, formally known as the Treaty on Principles Governing the Activities of States in the Exploration and Use of Outer Space, including the Moon and Other Celestial Bodies, adopted in 1967 by 98 countries of the United Nations.

Speener is quite serious about his claim. “It’s no joke,” he said, “There is nothing in the law that prohibits private ownership of any celestial body. It’s just something that’s not done everyday. I just wanted to be the first to do it.”

While Speener is the first private citizen to claim the super diamond, he is not the first to claim a celestial body. In 1980 a declaration to claim title of the moon was filed with the United Nations, United States, and Russian governments by Nevada entrepreneur/promoter Dennis Hope.

According to Hope’s website, www.lunarembassy.com, over 3,000,000 people from around the world have purchased property on the moon and other extraterrestrial locations.

Speener said that the primary reason for his claim is to draw attention to the astounding number of discoveries in all fields of science, and especially astronomy and space exploration.

“There is so much out there just waiting for us,” he said.

“We have walked on the moon and landed vehicles on Venus, Mars, Saturn’s moon Titan, and even a comet. We have navigated deep space probes that have left our solar system, and we have looked deep into space to see the very beginnings of our universe through the Hubble telescope floating in space. How can you not be totally amazed at that?”

When asked what he intends to do with his new super gem, Speener said, “I don’t what to do with it, but I would like find a way to use it to help people. A diamond that size could probably pay off the national debt, or, at today’s prices, at least buy a whole tank of gas.”

“My friends like to joke with me saying that I have it all figured out because while everyone else is trying to figure out a way to take it with them, I already have it waiting when I get there,” Speener added.

As far as what he may actually do with his claim, Speener said that he will just have to wait and see what the future holds.