Traveler’s Digest, a magazine for travelers, has made a list of countries and cities where world’s most beautiful women live. Russia and its capital of Moscow do not take the last place on the list, although the country and the city can not be found on such lists as “the safest, most fashionable and pleasant country in the world to go. 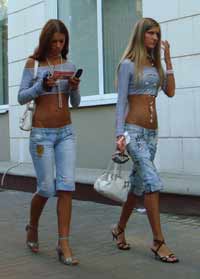 Sweden with its capital, Stockholm, is the most attractive place to go for male tourists, the authors of the research believe. The abundance of beautiful women in the city gives you an impression as if you have found yourself in a reality show about top models.

In addition, Swedish women are very friendly and well-educated. They speak English with the British accent, so many might take them for British ladies. It is worthy of note that Sweden, as well as other Scandinavian countries, are one of the safest countries in the world for tourists.

Argentina and Buenos Aires takes the second place on the list. Many young Argentinean women look like models because Buenos Aires is inhabited by descendants of Italian emigrants. South American women were distinctive for their exquisite beauty in the past too. The winner of the first-ever beauty pageant held in 1888 in Belgium was a girl from Guadeloupe.

The countries of Eastern Europe and the Baltic region take positions from 3 to 8: Russia, Bulgaria, Latvia, Belarus, Ukraine and Estonia respectively.

Germany , France and Switzerland have not been included on the list. The people of those countries pay much more attention to the way their animals look, tourists say. There is a saying in Switzerland which says that beauty pageants are held among cows, but not among women, because cows are nicer than women.

Denmark is also known as one of the safest and pleasant places to travel to. Copenhagen’s girls are distinctive for their freedom of expression and absolute indifference to the social status of their partner.

In the Netherlands, one can see beautiful women riding bicycles instead of cars, which helps them keep up a good shape. In addition, Amsterdam is included in the top ten of world’s most fashionable cities.

It is worthy of note that Israeli girls join the army at the age of 18. If a man cheats on an Israeli girl, he may be sure to have severe problems afterwards. Beauty girls from Montreal are attractive for their fluent French, which definitely makes them more charming.