It hasn’t been long after the 6-month thriller with Penza anchorites was over and the problem of religious sects is on everyone’s lips again. How could a group of people shut themselves off from the rest of the world in a dark cold cave for half a year and die form the lack of fresh food and medications? The answer is still not found. 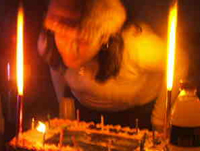 But this story sparked violent discussions about the negative effects of religious sects. Some people even proposed them to be banned. ‘This is impossible’, - says Sergey Popov, chairman of the Russian State Duma's Committee for Public and Religious Organizations, ‘because there is no legal notion for the word ‘sect’ in Russia’. Specialists still don’t have a single opinion on what a sect is. So, the sect’s activity can’t be considered as something criminal.

Russia ’s Independent Psychiatrists’ Association head states that sect members are not that different form the rest people - orthodox Christians or atheists. ‘They have good families, they neither drink alcohol nor use drugs. Besides, they live in a very comfortable atmosphere that comes from solidarity. The thing is, the word ‘sect’ comes from Latin language and can be translated as ‘share, follow’ and its main purpose is to branch off the official religion. There are lot of sects in among Protestants and Christians. Muslims also have 2 branches: Shiites and Sunnites. There are also several branches in Judaism. Though sects are often called new religious derivations, it turns out that these sects are often well forgotten old religious branches.

So sects can be banned only if religion is banned, as it was in the Soviet era. But at the same time in the west in the 70s there were founded several organizations that ‘deprogrammed’ young people and imposed a new lifestyle. In case of rebellion, theses people were threatened and punished.

An organization called Cult Awareness Network was notorious for the same actions. It folded up not so long ago. However there are still a lot of several organizations operating in Europe and the USA, but their methods are more humane. It seems though that such organizations are not going to appear in Russia anytime soon. Russian sects are aggressive and violent and they push people off more than stir up curiosity.

Still there are a lot of Russians that quite seldom go to church and don’t know anything about the true Orthodox religion, but say they are Christians and have the right to blame sect members. The thing is, religion is a very deep topic to study. Maybe sect members try to establish connection with the upper world in a different way. So it’s up a person to decide how to study religion. And the desire to understand what purpose a person lives for can not be judged anyways.