Nowadays it is already arduous to imagine our life without advertising. It is our drink, food and treatment… But is it really trustworthy? 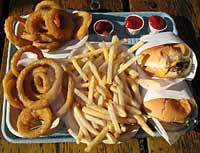 Commercials advertising drinking water are traditionally made in locations resembling paradise. Such adverts usually show a woman or a man diving into the unbelievably pure water. Naturally, this symbolizes bottled water. But do you know that this is water comes from a central water supply source? It would be more honest if the advert character swam in conduits and went through the ‘grinders’ of different filters that are used to purify water before it is bottled. There is one assuasive thing about it: manufacturers of this water do not display snowy mountains with ice-caps on the packaging and do not use words like ‘mineral’ in their trademarks to persuade customers that it is natural mineral water.

As a rule, bright advertising resembling animated cartoons disguises children’s products rich in calories, fats, sugar, salt and poor in nutritive substances. This kind of food is usually referred to as junk food.

“Now there is little doubt left that such advertisements affect children and parents and they buy such products under its influence,” said Dmitry Yanin, the Chairman of the Board of the International Confederation of Consumer Associations of Russia (KonfOP). “It affects children’s meals adversely – they develop unhealthy dietary habits. It is not only the lack of physical activity in children which is to blame for the current global epidemic of obesity. It is also about this kind of nourishment, when children consume food containing a great amount of fats, sugar and salt. Scientific research has proved that already. The World Health Organization supported by many social organizations launched a campaign against this advertising and even far beyond – against the promotion of these products. This is a global campaign that is coordinated in many countries. Recently our organization has joined this movement. We stand up for changing the Advertising Law, banning TV and radio advertisements of children’s food with high content of sugar, salt and fats from 6 a.m. to 9 p.m., and using cartoons characters in such advertisements and on unhealthy food promotion at schools”.

Among promotion materials prepared by the World Federation of Consumer Organizations – Consumers International - for the global campaign there are a lot of children’s products that are advertised as healthy and useful. For instance, the well-known chocolate breakfast and cornflakes in sugar syrup are considered to contain banned sugar doses.

Such ready breakfasts contain about 35 percent of sugar, while cornflakes – about 39 percent, which is seven-eight times above the norm. England’s Food Standards Agency that struggles against junk food considers that the norm is five grams of sugar per 100 grams of a product. Products with medium sugar level may content 5-15 grams of sugar, but food containing over 15 grams of sugar is very unhealthy. Nonetheless, it is hard to determine under which category quark, desserts, chocolate bars, sponge cakes and other children’s products go, though advertisements try to convince us of their wholesome properties: still their packaging does not show the percentage of salt, sugar or unhealthy fats.

Practically all advertisements of flu remedies try to convey the same idea: do not lose your time with cold or flu, take a medicine and go to work, study or do what you need to do. Most of people follow the advice: they suffer from cold and flu at work. Most people succeed, for strong remedies have an effect on symptoms.

But eliminated symptoms do not mean recovery. Flu and cold are infectious diseases. It is wrong to believe that flu is caused by cold. It cannot spring up without viruses and bacteria. These medicines are not at all harmful for them. So when you feel alright after taking medicines, viruses are continuing to propagate themselves. They poison your body imperceptibly under the disguise of medicines and this is the direct way to complications. Further still, you transmit viruses and infect people around you in transport, people you work or study with. Such advertisements are harmful not only for you, but for people around you. Within the first three or four days of your illness, when the viruses you dissipate into the atmosphere are especially active, do not go to work or any other public places.