Mysterious lights above Penza interpreted as omen for apocalypse

Mysterious lights above the Penza region have been interpreted by sectarians as an omen for the imminent apocalypse. 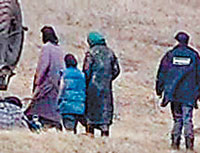 Mysterious lights above Penza interpreted as omen for apocalypse

The quaint message appeared in the night sky above the cave where some anchorets still stayed with their leader Vasily Prokofiyevich.

For a while some bright luminous object was moving at random in the sky making Penza police from the cordon gape in astonishment and slightly shocking reporters and villagers.

“It’s Peter’s soul,” concluded authoritative sectarian Anna who left the prayer hall to enjoy the unusual sight. “His soul is suffering and tossing about. The prophecy from the Scripture is coming true; the apocalypse is in the offing …

According to Anna, the events in the cave between the Nikolskoe and Poganovka villagies happened exactly as described in the Gospel, in chapter Eleven of John the Apostle’s Book of Revelation to be more exact.

“And there was given me a reed like unto a rod…And I will give power unto my two witnesses, and they shall prophesy… And if any man will hurt them, fire proceedeth out of their mouth, and devoureth their enemies…”

The quotation from the New Testament produced an indefinite impression on everyone who was awake the whole night.

By “a reed like unto a rod” sectarians were inclined to mean a log with which someone hit Peter Kuznetsov.

However, the policemen who were on duty near the cave did not agree with the sectarian.

“Nonsense,” argued a sergeant in the cordon. “It must have been a new satellite…”

According to Anna and her understanding of the Bible, in the near future “the beast that ascendeth out of the bottomless pit shall make war against them, and shall overcome them, and kill them”. Taking into account that Kuznetsov almost died in the arms of resuscitators, Vitaly Negodon is now to face the next “beast” who will dexterously use a log or any other country implements. Not too long ago Negodon was a professional soldier of the Russian Army, so we should not underestimate his chances against the mystic beast.

Meanwhile, inhabitants of Nikolskoe threaten bodily harm to the sectarians who have left the cave and live in the village now. That is why the religious sectarians will be still under the police’s protection. Besides, inhabitants of neighbouring villages are sick and tired of anchorites and bustle about them , so they are preparing a gathering.

“Sectarians have roused indignation of quite a few people headed by Dymok,” said policemen in Nikolskoe. “Men came more than once to the cave and to the house where some sectarians live. Until now there have been just threats, but we will hope it is all they will do.”

At the moment inhabitants of Nikolskoe are gathering signatures for a letter to Vladimir Putin and Dmitry Medvedev. In their letter they will demand immediate top-level intervention, for they can stand the situation no longer.

19:00
Consul of Japan caught red-handed for espionage in Russia
19:06
Kremlin responds to rumours to call-up 1.2 million people
15:18
Kremlin explains status of Ukraine's attacks on Donbas after referenda
14:47
Erdogan: Ukrainian politician Viktor Medvedchuk left for Russia from Turkey
14:27
Russian Defense Ministry clarifies professions exempt from partial call-up
21:31
Lavrov at UN Security Council: It is you who turn a blind eye on Kyiv's war crimes
15:50
Foreign POWs released in Donetsk arrive in Saudi Arabia
14:28
Dmitry Medvedev: 'Hypersonic arms will reach targets in US and EU faster'
13:58
Chechnya's Kadyrov: There will be good news from the zone of special operation soon
12:10
Kremlin needs cushion of time before final decisions are made
Politics
What to expect from Putin's Address to Federal Assembly on September 30?