There is hardly another piece of clothing that causes so much historical speculations as underwear, or underpants. They are unseen underneath clothes, so they left too little information for historian studying the evolution of human clothes. Images of underwear can never be seen on paintings of eminent artists, whereas descriptions of underwear cannot be found in voluminous historical works. It is too intimate to speak of it publicly. 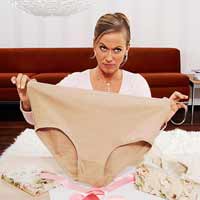 Even the origin date of underwear is enveloped in mystery. On the fourth century mosaic at the Sicilian Villa Armerina one can see two beautiful Roman women wearing red suits that look much like modern two-piece bathing suits. However, those suits were used for sports competitions, a research showed. In everyday life they wore tunics and togas.

One can also see underwear on the 15th century fresco Fountain of Youth in Piedmontese Castello della Manta castle in Italy. The fresco painting depicts disrobing elders getting ready to plunge into the waters of the fountain and dressing young men who have apparently tried the rejuvenating waters. Both elders and youths have modern white square-cut underwear on. Researchers say that those garments were used for everyday wear. However, it is very hard to find out when such underwear appeared.

There is another piece of evidence to prove that underpants existed as changeable clothing. Franco Sacchetti, an Italian poet and novelist of the 14th century, mocked at those who put their backsides into tiny stockings. This stocking (calcetto) indicates a possible origin of underpants.

All this refers to men’s fashion. The situation with female underwear is much more difficult. Before the late 19th century ladies did not wear anything resembling panties. Instead they wore quite unprepossessing petticoats made of white fabric without any adornments. Knickers appeared later: a garment with two separate legs that fastened at a girdle. Trouser-legs were not sewn together. Moreover, when some advanced Europeans contrived to sew them together, they were accused of immorality.

Closer to the turn of the centuries there appeared new linen and woolen petticoat-pants with frills low between legs. The summer version was knee-length. They also had clasps on the back. At that time there was an idea about beautiful and seducing underwear. The pants were sewn with lace and frills, and were adorned with tucks for extra volume.

In the 20th century dresses got shorter, and so did pants. A clasp was placed on the front part. In the 1920s women had several variants to choose from: small pants or a slip with a clasp. The last one had a beautiful cut and made female figures look slimmer.

Coco Chanel revolutionized fashion and simplified underwear. Though it still bore a resemblance to pants, new cuts became much simpler and all the unnecessary details and complicated lines were eliminated. The 1930s saw a wonderful discovery that underwear could be made of knightwear and be tight-fitting. At that time bathing suits looked the same way, to say nothing of sport swimsuits that outlined the figure indecently. Again the question of immorality arose when women started wearing frivolous and male clothes.

The further history occurred before our eyes. Underpants of the simplest cut were replaced with a great number of variants from classics to tangas. Today there are at least five variants of men’s and women’s underwear: small bikinis, boxers, slips, open thongs and modern tangas – to any possible taste. Finally, modern-day underwear is no longer considered an intimate piece of clothing. In fact, it is no longer underwear in the true sense of the word. Famous designers create new underwear that are supposed to be seen, at least their waistband.

It was Renee Zellweger’s character from Bridget Jones’s Diary who showed with her usual ingenuousness how to make your figure beautiful very quickly and to look gorgeous in an evening dress. Enormous granny panties may help.

Psychologists continue to discuss underwear and voice different ideas of what undergarments can speak of and which character traits a certain choice of underwear may reveal about a person. As it turns out, men choosing boxer shorts seem to appreciate comfort and to be tender and smart. A man who wears no underwear at all is light-minded and may remain a bachelor for the rest of his life.