Elderly woman sleeps outside even in severe winter cold

A sixty-year-old resident from a small town in Russia, Maria Dyakova, recalls with terror how heat-loving she used to be. 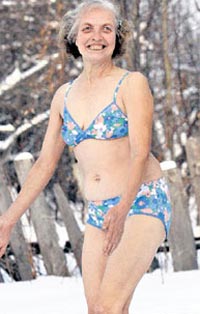 Elderly woman sleeps outside even in severe winter cold

“As a child I used to sleep under a thick warm blanket. In winter time my mother would place hot-water bottles around me,” said the former teacher. “Nevertheless, I would fall ill with quinsy, flu and pneumonia on a regular basis. When I grew up, I spent a lot of time at hospitals.”

Her life changed drastically thanks to the example of an English aristocrat.

When Maria caught quinsy again one winter, she watched a film about the English aristocrat who treated all her ailments with cold. The Russian woman decided to follow the example.

“Instead of hot milk with honey and butter I took a bucket of ice-cold water and began drinking it with big mugs. I opened a window for a night and slept only under one blanket, but I covered the head too not to freeze to death. In the morning I was surprised to find out that I had no throat pains. My temperature was fine and I felt more upbeat than usual,” the Russian pensioner said.

Maria started to open the window wider and wider with every night. In the morning she had to clean her room of snow sometimes.

“Once I resolved to leave for work wearing only my woolen suit and no outer clothes. The temperature outside was ten degrees below zero. People would stare at me, some would gesture to me that I was crazy. “Police cars would pull over beside me and officers would wonder if I was robbed. Since then I have not been wearing anything warmer than a thin sweater for seven years already. In winter I do exercises on snow, pour cold water on me, and since last November I started to sleep out of doors in all weathers. I have a bed in my vegetable garden,” the woman said.

An old iron bed covered with snow is not a good sight for the weak-nerved. There is a mattress, a sheet and a pillow under polyethylene that protects the bed from rain and snow.

“I always sleep there. When it is thirty degrees below zero I put warm clothes on – I take a blanket and a kerchief. I sleep very well outside. Everyone in the neighborhood think of me as a strange individual. Some call me a snowwoman and say that I should move to the North Pole. But those tale-tellers have to go to hospital every other day. They spend a half of their pensions on medicines, but I have not taken a single pill for years. I am going to live up to 147 years - twice longer than my grandfather lived,” Maria Dyakova said.

“There is such a treatment in medicine known as cryotherapy, or a treatment with cold. Its followers believe that it is justifiable from the point of view of human physiology, because there are a lot more cold receptors on our skin - ten times as much as warm receptors.

“Everyone is familiar with cryotherapy at least to a certain extent. Putting a piece of ice to a bruise reduces the swelling or inflammation. But I would like to warn people not to follow Dyakova’s example, for any treatment may be not only wholesome, but also harmful if used improperly.”