On Tuesday, a court of Krasnodar (a city in Russia’s south) brought down a sentence against a 15-year old girl who was found guilty of murdering her elderly landlady and a man, who was a rapist, as the girl claimed. 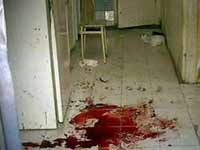 The 15-year old girl from Krasnodar was sentenced according to article “Homicide” of the Russian Penal Code. The girl was sentenced to nine years in a juvenile correctional facility.

In August 2007 a man was killed on the playground of a township near Krasnodar. A 15-year old girl confessed to the murder. She claimed that a rapist attacked her when she was walking with her dog. The investigation of the crime revealed that it was not the first crime committed by the teenager.

It was ascertained at court that the accused used an iron to kill an elderly lady who owned the apartment which the girl was renting. The girl spent the whole night near the corpse and in the morning she went out in the yard as if nothing happened.

Outside the girl got acquainted with a man and drank vodka with him. Afterwards they quarreled with each other, and the girl hit him on the head with a nailed plank. She went to her flat then, took a kitchen knife and finished her victim.

The girl committed the above-mentioned two crimes in two days.

She told the police that the man attempted to rape her. However, there was no evidence found to prove the girl’s version.

It became known later that she had killed the man in a fight over money. The elderly woman was murdered because she wanted the girl out of her apartment.

The girl comes from an antisocial family. Her mother, an alcohol addict, was deprived of parental rights, and the girl was sent to boarding school.