A boy weighing 6.1 kilos (13.45 lb) and 63 cm (24.8 in) long was born in Khabarovsk, a city in the Far East of Russia. The baby and his mother are fine, doctors said. “The woman gave birth to the baby through Cesarean section. This is her sixth child,” a doctor said. 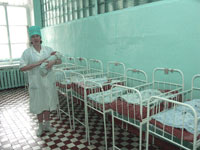 Oksana Yakhinova, the chief gynecologist of Khabarovsk, stated that it was the biggest baby that was ever born in the city during the recent eight years. “Our previous record holder was born weighing 5.6 kilograms,” the doctors told RIA Novosti.

An ultrasound examination conducted on the 33rd week of the woman’s pregnancy showed that the baby already weighed 2.5 kg. Doctors feared that the woman would not be able to deliver such a heavy baby. However, the girl was born as an absolutely healthy child. The big baby was named Nadya; she became the 11th child in the family.

Another recent incident of the ilk was reported in September of 2006, when a woman from Connecticut, USA, gave birth to a 14-pound boy. The newborn - Stephon Hendrix Louis-Jean - broke the 18-year record for the biggest baby ever born at the hospital by 1 pound, 13 ounces. He was nearly 23 inches long, the AP reports.