Law-enforcement agencies of St.Petersburg investigate a murder case filed against former boxer Alexander Kuznetsov who murdered a pedophile rapist. The jury will decide the man’s fate in the next several days. It is not ruled out that Kuznetsov can be fully acquitted, Vesti.ru reports. 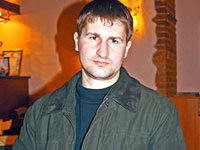 The former athlete committed the crime in a state of temporary insanity on New Year’s night, January 1, 2008. Alexander Kuznetsov entered the apartment building where he lived with his family and saw an unidentified adult male abusing a little boy. The boy was Kuznetsov’s eight-year-old adopted son.

The defendant said that the boy was unconscious, beaten and stripped. The boy’s step-father, formerly a professional boxer, killed the pedophile with a few blows. The latter was subsequently identified as a 20-year-old native of Uzbekistan (a former republic of the Soviet Union), a student at one of Russian universities.

“I wanted to detain him. I don’t know how it happened. I could not control myself,” Kuznetsov said at court.

There are no eyewitnesses in the case, but all facts testify to Kuznetsov’s honesty. Prosecutors tend to believe the defendant too. The state of affairs will be cleared out completely when investigators are granted a decision to interrogate the boy, the victim of attempted rape. Psychologists do not allow to conduct the procedure at the moment yet not to harm the child.

For the time being, Alexander Kuznetsov has been charged with causing grievous severe bodily harm entailing a lethal outcome. The defendant can be jailed for up to ten years.

Alexander Kuznetsov’s case is reminiscent of that of Alexandra Ivannikova, a female resident of Moscow. The young woman was charged with murder in 2003. Ivannikova, was returning home late at night on 8 December 2003. On her way home, the woman decided to flag down a car. The first driver was able to take the woman home only halfway. Alexandra Ivannikova had to stop another car. Instead of taking the woman to her address, the young driver, named only as Sergei B., stopped the car in a dark side street and asked the woman to perform oral sex on him.

The driver was trying to force the girl to oral sex, but she was fighting. When Alexandra said “Wait” and reached out to her purse, Sergei loosened the grip: the young man apparently thought that the girl wanted to take a condom. The girl pulled out a small kitchen knife and stabbed the man in his leg. The blade went into the femoral artery and caused profuse bleeding. Alexandra opened the door of the car and escaped. Sergei B. died from loss of blood.

Ivannikova was fully acquitted on November 25, 2005.