Man slaughters child because he did not let him watch TV

A male resident of Chelyabinsk, a city in Russia’s Ural region, brutally murdered a three-year-old boy, who did not let him watch TV. The enraged man stabbed the child about 30 times. 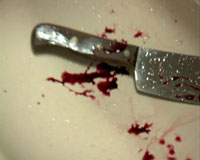 Man slaughters child because he did not let him watch TV

Case papers on the brutal murder of the child have already been sent to the Chelyabinsk District Court, press centre of the regional public prosecutor's office says.

The man killed the child just because the boy disturbed him when he was watching TV. The murderer inflicted 27 knife wounds on the boy’s chest and neck. At the moment of murder the accused was under the influence. Now he is accused of the deliberate murder of a helpless person. The man can be imprisoned for eight or twenty years, or for life.

It is noteworthy that a similar murder of a child already took place in the Chelyabinsk region three months ago. The man killed the three-year-old son of his mistress. The child was crying too loudly, and the stepfather strangled him. Afterwards it was discovered that the child was a handicapped individual from birth and suffered from deafness, heart disease and infantile cerebral paralysis.

Another similar incident occurred in the Moscow region in September. A mother slaughtered her three-year-old son because he bothered her while she was resting. in Pushkino, Moscow region.

It should be noted that television often becomes an apple of discord that leads to a lethal outcome. About a month ago a woman slaughtered her husband after the latter ‘confiscated’ the remote control.

Even children sometimes do not yield to adults in this respect. A twelve-year-old boy knifed his elder brother while fighting for TV in the USA in November 2007.

In Russia’s Karelia a grandchild killed his own granny for the same reason. The teenager and the elderly lady could not come to a unanimous decision which TV program to watch. The infuriated grandchild attacked his grandmother with a knife. The woman died soon after the fight.