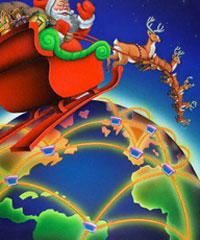 The command, often called NORAD, has been tracking Santa's movements for more than 50 years as he travels the globe and delivers toys to boys and girls.

The NORAD Tracks Santa Web site is the form of a public relations program by the North American Aerospace Defense Command (NORAD). For over fifty years on Christmas Eve NORAD has told stories of how their powerful tracking systems such as the Distant Early Warning Line (DEW Line) detected Santa Claus leaving the North Pole to deliver his presents.This happens every year.

The Web site is updated each hour to show a CGI-rendered Santa flying over one or more major cities in the time zone where it is midnight. These are viewable as videos which also include a voiceover from a member of NORAD staff (usually; on the 2005 - and 2006 due to the voiceovers being re-used - site, the video showing him over London had a voiceover by well known British celebrity Jonathan Ross, and 2004 had former Beatle Ringo Starr), explaining his location along with various facts about Santa and the country he is visiting.