Woman gets rich after being boiled alive

A 23-year-old female student from Russia’s St.Petersburg won a case against communal services of the city. Viktoria Frolova fell into a pit of hot water that had been formed as a result of a heating main breakdown. The woman had almost 95 percent of her body burnt, but was lucky to stay alive and recover. She will now be awarded five million rubles ($200,000) to compensate her damage. 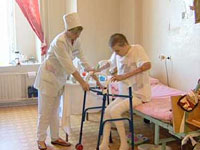 Woman gets rich after being boiled alive

The tragedy took place three years ago, on New Year’s night of January 1, 2005 at about 7 a.m. Hot water pipes burst under the ground in Karavaevskaya Street of St.Petersbrug at 5 a.m. The asphalt road caved in as a result of the breakdown, but there were no warning signs set up around the pit.

Viktoria was driving her Zhiguli car with her boyfriend. The couple was going to visit the young man’s parents. The young people suddenly saw a cloud of steam in the middle of the road but there were no barriers placed anywhere near. As soon as the woman drove into the fogged area the car fell down into the pit filled with hot water. Viktoria managed to climb out of the pit with the help of a passer-by.

It turned out later that six other people had fallen into the pit before Viktoria’s accident: four teenagers, a 19-year-old girl and a 22-year-old young man. Three of them died of severe burns.

Viktoria Frolova was hospitalized with burns all over her body. As a rule, such burns are lethal, but the woman survived and recovered after five operations.

It is worthy of note that about 50 employees of St.Petersburg’s energy-providing company, Lenenergo, donated their blood to Viktoria. The woman stood up on her feet again, started walking and returned to her studies.

The case filed into the criminal negligence that resulted in several deaths was closed a year later. No one was punished. Afterwards, Viktoria Frolova filed a lawsuit against communal enterprises of the city claiming a compensation for the bodily damage that she had suffered. The woman said in her statement that the communal services did not react properly to the breakdown of the hot water pipelines. Viktoria Frolova evaluated her damage at five million rubles and eventually won the case.