Enterprising and caring pedophile on trial in Russia

A pedophile who committed a series of sex crimes against underage boys is currently on trial in the Samara region of Russia. The janitor dubbed as Timoha already has a criminal record: he has been convicted of similar offences three times before. He paid 100 rubles (about $4) to each of his victims for intimate services. All his five victims were less than 16. 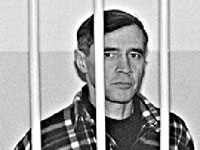 Enterprising and caring pedophile on trial in Russia

Vladimir Timofeev (Timoha) went at large after his third conviction in the summer 2006. He started working as a janitor. The man was spending his free time at sports grounds and yards spotting small boys. The molester dated his ‘lovers’ in the cellar where he kept the implements. He could not take boys to his own house since he lived there with mother.

Now the pervert is quite cooperative and willingly testifies to investigators. “I would approach boys, befriend them and offer them to meet again. I would tell them of my intentions point blank and offer money for it,” said Timofeev.

One day Timofeev found a pack of somebody’s passport copies in a garbage can. From that time on his private life finally started to improve. Timofeev obtained several phone numbers with the help of those copies and started to hang dirty advertisements in the neighborhood. The enterprising pedophile offered 100 roubles to every teenager.

Children started visiting the pervert’s love den at their own will, out of curiosity. They were interested in the way the adults ‘do it.’ Unsuspecting children came to visit the man who was always ready to show what and how they should do to satisfy pedophile’s needs.

Timofeev confesses that can not remember all victims because of his popularity. He says that even girls were eager to date him, but he rejected them. “Girls called me, but I said ‘no’, I’m not interested in them,” he said.

Timofeev does not consider his actions to be vicious, since he forced and distressed nobody.

The pedophile was arrested May 29 of the current year. The child molester locked himself up with two schoolboys in the basement. Timofeev and his victims kept the police out for a long time. When the door finally opened, the children tried to find excuses for their presence in the basement with Timofeev. “We came in just to drink some water,” they said.

In 1986 Timofeev got his first conviction of sexual abuse of juveniles without the use of force. At that time he was sentenced to three years in prison.

In the 1990s he organized child pornography studio at his home. From 300 to 2000 juvenile ‘models’ passed through this studio. He filmed 300 hours of video and made about 10,000 photos. But nowadays his creative career can be forgotten; he can not even afford a lawyer.