The Czech Republic and Holland in Europe as well as Egypt and Thailand in Asia rank first in sex tourism. Egypt attracts young girls and middle-aged housewives whose only desire is to have violent and non-committal love affairs. Thailand, in its turn, is real Eden for men. It is a country of very low prices (one U.S. dollars equals 40 Thai bahts) and women of easy virtue. Money determines everything there. 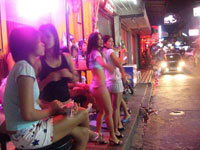 Pattaya, a small resort town on the Gulf of Siam beach, two hours far from Bangkok, is the place of lustful entertainment can be found almost everywhere. One of the most popular T-shirt wordings runs: “Good guys go to heaven, bad guys go to Pattaya”.

A foreign man can do whatever he wants with Thai women: use her for several minutes or for his entire holidays, stay with her in a special room or take her to a cheap hotel, and so on. If you want to know the price, do not be surprised to hear: “Up to you”.

A Thai prostitute can take no money at all just because she likes the man. Romantic couples, a European male and a native girl, walking hand in hand with one another are not uncommon in Thailand.

Anyone of European descend is referred to as ‘farang.’ It is a sort of fruit growing in Thailand: it is green, hard, wrinkled and covered with pimples. It seems to be something like native humor. But in practice everything is simpler, the words ‘foreigner’ and ‘pharang’ sound rather similar to the Thai.

Though girls in Pattaya come very easy. The most popular place for adult night entertainment in Pattaya is known as Walking Street. The street is full of vendors, farangs and prostitutes every night.

The majority of prostitutes can be found in so-called go-go-bars. They just lease a place there. The rent (up to 15,000 bahts a month) depends on the bar level. Thus, they have an opportunity to sit at the bar and entice tourists. All of them know standard phrases in English: “Hello, sexy man! Where are you going? I will go with you!” All this is accompanied by smack and squeal. A rather strange and peculiar show.

There are also ‘barge pole girls bars’ and ‘massage parlors’. In such parlors a girl would pour aromatic oil over a client and rub her body against him, etc. All for 1,000 bahts. But it has nothing to do with the famous Thai massage. The latter is just perfect, but you can have it done only in serious organizations like ‘massage institute’ or ‘massage hall’. Sometimes tourists may get into delicate situations because of their own inexperience.

Every Thai prostitute has her ID with personal number and other information. A watchful guard at the entrance to a night club or a bar asks for the ID and writes data down just in case some client would be dissatisfied.

These cards came into use after numerous thefts. It was very difficult to find thieves before, all Asians seem to look the same to foreign tourists. Thus, the sex industry is practically run by state nowadays. All prostitutes have to pay entrance fees, travel.newsru.com reports.

However, there are hotels where nobody cares who you may stay with. Even if you want to take an elephant to your apartment, the only possible remark would be: “How sweet! What a nice trunk!”