Condoleezza Rice may have lesbian affair with filmmaker from California

The popularity of a famous person can be viewed best with the help of Google search engine. Last week, for example, about 146,000 online surfers evinced a great interest in the private life of the U.S. Secretary of State Condoleezza Rice, The Sunday Times reports. The people were searching for the adequate information using only two words – ‘Condoleezza’ and ‘lesbian.’ 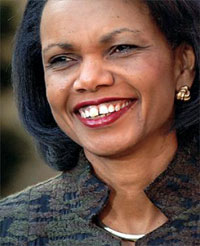 Condoleezza Rice may have lesbian affair with filmmaker from California

People’s interest in the sex life of the top U.S. official appeared after an article published in The National Enquirer. Authors referred to an anonymous individual who claimed that Condoleezza Rice was a 100-percent lesbian when working at the Stanford University for six years during the 1990s.

Another story with a house in Palo Alto, California, also proves Mrs. Rice’s passion for women, the magazine wrote. Glenn Kessler, a staff writer of The Washington Post, the author of Condoleezza Rice’s voluminous biography, found out that Mrs. Rice intends to return to Stanford from Washington as soon as George W. Bush steps down. She reportedly owns a house in Palo Alto, although it is not clear if Mrs. Rice shares the ownership with another single woman.

The woman’s name is Randy Bean. She is a documentary filmmaker who now works at Stanford University. Bean and Rice have been friends for about 25 years already. Kessler wrote that they are best friends with each other.

Glenn Kessler did not specify whether Randy Bean and Condoleezza Rice harbor something more than just friendship. Nevertheless, gays and lesbians believe that Condi is a woman of their kind. They are certain that Mrs. Rice does not participate in the current struggle for the White House solely because of her unconventional sexual orientation.