Roman Abramovich schemed a way to make fast money while serving as a private soldier in the Soviet Army years ago. He cut a deal with drivers of his unit to trade gasoline for candy and pastry. He then sold the “saved-up” gasoline to some of the commissioned officers of his unit. 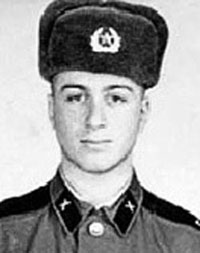 Nikolai Panteleimonov, Abramovich’s former army friend, speaks with Zhizn about that episode in the biography of the Russian billionaire.

“The two of us hit it off immediately,” Panteleimonov said. “We served in a rocket force unit stationed in the town of Kirzhach – a small town in the Vladimir Oblast.

According to Panteleimonov, the future oligarch showed lots of enterprise even in his early years. “Roma (Russian diminutive for “Roman” – ed. note) was just 20 at the time. And he was head and shoulders above the rest when it comes to entrepreneurship. He could make money out of thin air. A soldier’s monthly allowance was 7 rubles back then. It’s not enough if you have a sweet tooth or a date you want to take to the movies during leave. Roma came up with a scheme: he managed to talk the drivers into siphoning some fuel off their vehicles. The containers full of fuel would be dropped in a location that has been agreed in advance. Abramovich didn’t siphon off gas himself – he only gave instructions to the guys,” Panteleimov added.

“A group of soldiers would enter a garage after dark. They’d siphon 5-7 liters of gas from the car’s tank and fill the container. The amount was thought to be too small for the sergeants to discover any fuel ullage the next morning. The soldiers would drop the containers in a nearby forest, where another group of servicemen would pick them up later,” Panteleimonov said.

“A liter of gasoline cost 40 kopeks at the time. Roma was selling the stolen gas to the officers of our unit, charging them 20 kopeks a liter. And his customers knew well where that fuel was coming from. But they didn’t report the case to anybody. Every party involved was quite happy: the officers could buy gas for their cars at half price while the soldiers could pocket some extra money for their own needs. Abramovich kept a part of the profits for himself. He also bought ice cream or pastry for his helpers – a sort of incentive for the work well-done,” Panteleimonov said.

Abramovich ended up “helping out” his superiors on a variety of issues. It was clear that he would go far. However, none of his fellow servicemen could foresee that he would become one of the richest men in the world.