Mankind will never run out of oil

The longstanding debate about petroleum origins can easily fall under the category of “great geological debates.” 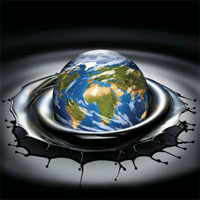 Mankind will never run out of oil

Not unlike the Sumerians and Assyrians, the ancient Chinese and Greeks did not care much for an origin of petroleum in a time long past. They just drew crude oil from the wells, and used it as a fuel for illuminating their homes or in military purposes. The first hypotheses with regard to petroleum origins were first proposed in the eighteenth century. The Russian scholar Mikhail Lomonosov is thought to have proposed the first biogenic (organic) hypothesis for petroleum in the year 1757. According to the biogenic hypothesis, petroleum is a fossil fuel that evolved from biological detritus. A number of abiogenic hypotheses were proposed in the nineteenth century, most notably by the Russian chemist Dmitri Mendeleev. The abiogenic hypothesis holds that petroleum is a primordial material of deep origin which was erupted to the crust of Earth.

“The duration of a process is one of the factors by which the one theory differs from the other,” said Vadim Skaryatin, Doctor of Geology. “In the first case, it would take millions of years for biological detritus to turn into petroleum. However, the process would only take several hundred years, if not decades, to complete provided the abiogenic theory is correct,” Dr. Skaryatin added.

Both the biogenic and abiogenic hypotheses were developed and put to the test over the course of the 21st century. Strangely enough, the public seems to be aware of the only one i.e. the hypothesis that petroleum may somehow originate from biological detritus in sediments near the surface of Earth. The volume of biological matter on Earth is limited, and therefore petroleum should be eventually depleted. Even the modern methods of geological prospecting fail to provided reliable data on recoverable oil reserves still hiding away in the earth’s crust.

What is the reason behind the “popularity” of the biogenic hypothesis? And why the abiogenic one seems to be gathering dust in the backyard? One may be under the impression that the top players of the international petroleum industry have somehow conspired to keep the oil prices high. Is there any possibility of the abiogenic hypothesis being shelved on purpose?

“As regards the scientific community, many of its members have long opted to be silent about the abiogenic petroleum theory for reasons that appear quite mundane, by and large. They aimed to keep their jobs intact by sticking to their conservative points of view,” said Dr. Skaryatin. “A case of conspiracy involving oil companies? Well, it could have happen at the dawn of oil drilling and exploration in America,” Dr. Skaryatin added.

According to Academician Anatoly Dmitrievsky, director of the Institute for Oil and Gas Studies, the biogenic hypothesis was used by geologists who searched for oil at the turn of the 20th century.

“The practice was dubbed ‘wildcat’ drilling. In other words, a well was drilled without a complete geological exploration of the locality. Oilmen could strike it rich if they hit a petroleum deposit. However, those wells were drilled only in the rock formation of sedimentary origin, the so-called ‘source rocks’ which should form petroleum in accordance with the biogenic theory of petroleum formation,” said Academician Dmitrievsky.

The use of more advanced methods of petroleum exploration enabled geologists to discover oil fields which produce from the crystalline basement rock – the type of rock formation that is not supposed to bear any oil. For instance, the giant White Tiger oil field was discovered off the coast of Vietnam. The reservoir sits on the granite rock – a fact that cannot be explained by the biogenic hypothesis. On the other hand, the abiogenic hypothesis seems to be just to the point.

The scientific community could no longer disregard the abiogenic hypothesis as more facts have come to light over the last several years. The theory has been gaining ground following recent sensational reports. As it turned out, some of the old oil fields have reportedly yielded 150 percent of the previously estimated volumes of recoverable reserves, and they keep producing contrary to forecasts.

“All the petroleum fields presently producing are drawing hydrocarbons from an open and active fault from the mantle. We should bear in mind that there is no such thing as an impermeable rock,” Dr. Skaryatin said. “There are two small-sized oil fields located on the border between Georgia and Azerbaijan. They have been producing for more than 100 years. We are aware of similar oil fields in the Carpathians, South America and other regions,” added he.

Renat Muslimov, an adviser to the president of Tatarstan, claims that the 60-year-old Romashkin oil field has been constantly drawing petroleum via the faults in the basement.

“We have previously considered the field as depleted by 80 percent. However, the reserves show an increase of 1.5.-2 million tons each year. According to our new estimates, the field will be producing up to the year 2200,” Muslimov said.

The first well in the Old Oil Field, located in Grozny, the capital of Chechnya, was drilled in the late 1890s. About 100 million tons of crude had been extracted from the field by the mid-twentieth century. Then the field was deemed depleted. However, the field “came to life” fifty years later. The wells are filling up with oil again, and the replenishment rate is extremely high. Locals are reported to use buckets for drawing oil. The developments may result in most dire consequences for the area, according to ecologists who recently visited Grozny. “An environmental disaster is probably waiting in the wings out there. The city will be drowned in oil if it gets to the surface. A terrible fire may occur as well,” said one of the ecologists.

The question is: Which of the two hypotheses – the one proposed by Lomonosov or the other one by Mendeleev - holds any water or oil, for that matter?

“By no means should we hold back nature because oil can be formed by one way or another,” Academician Dmitrievsky said. “I wouldn’t dare claim that the abiogenic theory is a guarantee if our happy future. We just can’t go on drawing oil recklessly on the premise that it will never run dry,” he added.

Dr. Skaryatin suggests that the oil industry use a different strategy based on scientifically proven estimates e.g. production rates should be decreased, inflow rates should be taken into consideration, and oil wells should be mothballed for a period of time. Managed thus, Earth would allow us to have far more greater volumes of its “black gold.”