Water still remains one of world’s biggest mysteries for researchers

According to modern researches planet Earth in ancient times used to be of a smaller size and had a bigger rotary axis speed than today. It is natural that days grew longer as the size of the planet increased and its rotation slowed down. A material body acquires a slower speed as its diameter increases. Figure skaters similarly bring their arms near or away from their bodies to increase or reduce the number of turns. 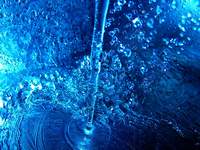 Water still remains one of world’s biggest mysteries for researchers

Another reason why Earth began to rotate slower was a great amount of water that regularly dropped on its surface, those were basically the Deluges. There are probably more reasons that may explain why the planet’s rotation grew slower. It is supposed for instance that the daily revolution of the planet will continue slowing down for some time more, and then the number of its turns will start increasing as enlargement of the planet will cease and the water amount on it surface will reduce. According to ancient legends and myths, water on the surface of the planet appeared as a result of sweeping and small floods. Egyptian and oriental sources tell about regular catastrophes of different sorts such as floods, fires, earthquakes, meteorite showers, merging of oceans with the surface, etc.

Let us view the Universe from the outside. Inside the Universe the Solar System rotates around the axis of the world that goes across the pole star. The Earth which is part of the Solar System comes across and crosses various zones, meteorite, gas, energetic and temperature nebulas on its way. These zones cause qualitative changes of the planet’s surface. Besides water, huge layers of space ashes and meteorites also dropped on the Earth; changes in the atmospheric air and temperature entailed changes in flora and fauna. Ancient legends and modern researches prove that the surface of the planet was three times covered with huge amounts of water because of a synthesis between the Earth’s atmosphere and special space energy products.

Huge water amounts vanished from the surface of the planet thus leaving it as devastated as we can currently see the surfaces of the Moon, Mars and Venus. Water from the surface evaporated when higher temperatures and fire appeared. We are now living in the middle of the fourth appearance of water of the Earth’s surface that started about 120 thousand of years ago. At that, steady ice formation near the geographic poles of the planet began about 40 thousand of years ago. The date was several times mentioned in various ancient sources. As the geographic poles shift their ice fields follow them and form new centers in new areas while their older centers fade.

During the initial period of the Earth its daily rotation lasted for about three hours of present-day time. As the diameter of the planet and the amount of water that dropped on its surface increased the speed of the planet’s rotation grew slower.

Year ago Mars and other planets of the Solar System also had water on their surfaces. The regularity of water appearance on the planets’ surface that was then replaced with periods of devastation and higher temperatures, the way it takes place on the Venus, is not clear yet.

Water is still a big mystery for researchers who are from time to time lucky to discover new characteristics, including medicinal ones of water. Water together with fire is a great attraction for both children and adults. The function of fresh and salt water on the surface of the planet is not completely studied. It is still not clear why water does not evaporate from Earth’s surface into space.

Research works conducted on the surface of the Moon have revealed that there is water in its ground. It is highly likely that other planets also have water in the ground. Biological life springs up on planets’ surface as soon as they get water in the ground. Will people survive on Earth after big and smaller catastrophes, and especially after water evaporates from the surface? We know that previous civilizations built towns and various spaces under the surface, supplied them with water, air and other essential things to be able to stay there for a long period of time.

Under Earth's crust people can be protected from space radiation, magnetic storms, meteorite showers, floods and fires. Ancient legends and historical records mentioned underground homes of people. It is known that people called the Tamils and living in the south of India and Sri-Lanka emerged from under the surface in the ancient epochs. Other people got settled in underground towns on the eve of sweeping catastrophes.

Pioneer of cosmonautics Tsiolkovsky knew that some planets may come into being and others may disappear; he gave birth to an idea of resettling people from some planets to others where they can build homes and laboratories right in the crust. Inside spaces of planets always contain water, air and other components essential for life. This is probably how the first people appeared on this planet. It is just after the Earth formed a secure atmosphere that people got out from under the surface to build cities and other constructions on the surface.

For the time being, experts from Russia, Finland, Japan and the USA are working on building of special complexes for living and production that will be buried in the ground of the Moon.