About 20 werewolves wander around the world nowadays 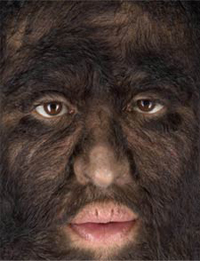 About 20 werewolves wander around the world nowadays

In earlier eras, people afflicted with CGH would stay indoors during the day, going out only at night, to avoid being ostracized. Because of this behavior, people began to associate these unfortunate folks with werewolves, thus the vulgar name of Werewolf Syndrome. CGH is characterized, in its severest form, by thick hair covering the entire body, sparing the palms of the hands, and soles of the feet! Researchers believe the cause to be a genetic mutation, or an “awakening” of a very old, dormant gene-harkening back in evolution to hairier times!

CGH is extremely rare, with only about 50 documented cases since the Middle Ages. One of the first documented cases was found in French King Henry II’s court! King Henry was highly interested in human oddities and quirks of nature, and in 1547 was given, as a gift, a 10 year old boy who appeared to be half human, half animal. Four inch, thick blond fur covered his entire body, except for lips and eyes.

The boy’s name was Pedro Gonzales, born in the Canary Islands. Pedro married a lovely French woman, and fathered many children, five of which inherited their father's genetic defect. Many portraits were painted of this unusual family-some still hang in the Ambras Castle, near Innsbruck, Austria. Since then, known cases have appeared in China, Poland, Germany, Russia, and Mexico.

Researchers are familiar with other atavistic genetic behavior. Some rare examples include additional nipples, and small tail-like extrusions at the end of the spine. The defective gene in CGH is passed by both sexes, to 50% of their offspring. Typically, fetuses lose their fine body hair, called lanugo, by the end of the seventh and eight month of gestation. Babies afflicted with CGH are born with this body hair intact, which occasionally fades in adulthood, but typically lastis a lifetime.

Currently, the best known cases of CGH occurs in a family living in Mexico. Sadly, much of this family has resorted to working in circuses and “freak” shows to earn a living. This Mexican family grows an even thicker, darker body hair than their Asian, and European counterparts. Men have thicker and denser hair than the women in this family, suggesting an X-linked dominant pattern of inheritance, cardiagra.blogspot.com reports.

There are different types of this condition such as congenital hypertrichosis, which is unpigmented, fine, soft hair that grows excessively and persists through life. Naevoid hypertrichosis is where an abundance of hair grows thickly in one spot or place, with normal hair surrounding it. Acquired hypertrichosis occurs on a individual after birth, unlike the other types of this disease, which usually occur before birth.

Statistics show that there is a one out of a billion chance to get this disease. Also, only 19 people in the world alive today have hypertrichosis. This disease can be mild or severe, although severe cases are rare. In the severe cases, it is unmistakingly due to genetic defects. Some of these people have been featured in sideshows with names like "bearded lady," "werewolf man," and "dog-boy."

You may have heard of the two brothers named Victor "Danny" Ramos and Gabriel "Larry" Ramos. These brothers have excessive hair on their face and chest, almost looking like fur. The only visible place they do not have this hair is around their eyes, mouth, and upper ears and hands. They both have worked as acrobats, and even their two cousins have this disease.

This condition has also appeared in some forms of media. In the movie 'Fur: an imaginary portrait of Diane Arbus' the main character in the movie has severe hypertrichosis. Also, the film 'human nature' shows a woman with the disease. In three novels by Patricia Cornwell, her character Jean-Baptiste Chandonne suffers from this condition.

To further explain this disease, it is caused by an androgen excess disorder. Androgen hair is hair follicles that respond to androgens, which allows for the rate of hair growth and heaviness of the hairs to increase. In most cases, hypertrichosis is genetic, but even certain drugs and toxins (like mercury) can cause excessive hair growth. Also, it can be caused by malnutrition or an untreated infection. For most cases, this disease is a cosmetic problem. Possible treatments could be bleaching of the hair, waxing, which is only temporary, or permanent removal called electrolysis or laser destruction of hair follicles. Electrolysis is somewhat expensive and prices range up to 25 through 150 dollars, wisegeek.com reports.