“To deal with a giant asteroid, the human race will probably have to detonate a nuclear charge with an explosive force equal to that of several hundred A-bombs dropped on Hiroshima,” said Anatoly Zaitsev, head of the Russian Center for Planetary Defense. On the face of it, his idea to use nukes for stopping a space intruder may appear crazy. However, one might as well give it another thought should the threat posed by a giant asteroid look real. Anatoly Zaitsev speaks with MK reporters about his plan to prevent the end of the world: 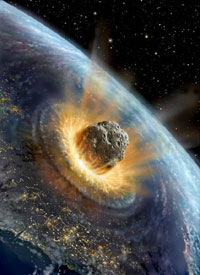 “There’s a lack of government support for us, that’s the main ingredient still missing. All the remaining components are on hand,” Zaitsev said. The Tsitadel (Russian for “citadel”) program encompasses the best projects developed by the Lavochkin NPO (a production and research company – ed. note), Molniya NPO, and Vympel NPO. The projects aim to detect and intercept dangerous heavenly bodies. Westerns companies have just begun working on the problem, whereas we got plenty of experience and necessary equipment,” Zaitsev added.

Yet the Americans have long built a powerful skyward “scanner” capable of gathering data on every dangerous heavenly body.

It’s true. But the U.S. skyward surveillance system can only detect flying objects at night, whereas our equipment is capable of identifying objects bound for Earth from the Sun. We will be able to build a reliable system for the global anti-asteroid protection of Earth within five years provided that our program is adequately funded. This country could take full advantage of such an opportunity. However, the Russian government seems to be completely aware of a real threat posed by asteroids.

Perhaps the threat has been slightly exaggerated

Well, you can judge for yourself. According to estimates by U.S. sources, there are about 4,000 asteroids flying in space at the moment. Those asteroids pose a potential threat to Earth. Some of them are the size of a fellow that caused the Tunguska Event, others are even larger. A larger asteroid poses the biggest threat. I’m referring to Apophis, a notorious asteroid measuring from 200 to 400 meters in diameter. In 2029, it is expected to fly past Earth at a distance of less than 40,000 kilometers. If the asteroid should get into a small area dubbed a “keyhole” during a fly-by in 2029, it will inevitably collide with Earth while flying past the planet again in 2036.

So what is your plan?

We suggest that a rapid response air-ground force under the Tsitadel program be put in place. The task force will comprise surveillance spacecraft, exploration spacecraft and interceptors.

Once adangerousheavenly body issighted by surveillance spacecraft, light-weight exploration spacecraft will be immediately launched into space to gather data for target acquisition. Exploration spacecraft would approach an ‘aggressor’ and take photographs of it; they would also examine its makeup and trajectory. By the way, we are no strangers to this kind of activity. The Soviet Vega unmanned spacecraft designed by the Lavochkin NPO were launched to flyby Comet Halley in the mid-1980s. The spacecraft had a two part mission to investigate Venus and also flyby the comet.

What about the interceptors? Are they available to share in the program?

The Center for Planetary Defense suggests that an interceptor be built using the design of Phobos Ground spacecraft, which should be launched to flyby Mars’ moon in 2009. If we get enough information regarding a collision several years before it actually takes place e.g. the Apophis case, we would be able to deploy an interceptor for dealing a kinetic blow to the asteroid. It will change its speed and direction following the blow, and therefore it will pose no threat to Earth any longer.

What if an object the size of the Tunguska Meteorite should come out of the blue?

Then we’ll have to act according to a contingency interception plan. There is a booster rocket Dnieper, designed on the basis of the ballistic missile Satana (Russian for “Satan”). It can be activated for launching within several minutes. We can also use the method of a kinetic blow if an object is relatively small, some fifty meters or so in diameter. However, a nuclear explosion will be the only solution for taking care of a ‘space stranger’ which measures from 100 to 200 meters. Using a nuclear weapon against asteroids is currently considered the most reliable method.

Is it going to be a big blast?

We will have to use a nuclear charge with an explosive force equal to that of several thousands A-bombs dropped on Hiroshima. In other words, it’s going be a megaton nuclear charge.

What kind of impact will it have on the humankind?

The impact may vary depending on a distance at which the charge will be detonated. In any case, we’ll have to go for the lesser of two evils. We propose that an insurance fund of the humankind be set up so that different nations may join forces to deal with the threat of an asteroid attack; otherwise a nation that builds an anti-asteroid defense system single-handed may be enticed to dictate its terms to other nations or simply keep them in the dark about the impending danger.