Asteroid may cause Apocalypses on the planet in 2029 or 2036

Many researchers believe that an asteroid may hit the planet any moment. And the statistics states that a celestial body of a football ground size may absolutely destroy the life on the planet once in a thousand of years. American astronomers predict that a 400-meter asteroid will scratch the Earth surface some day in the future. 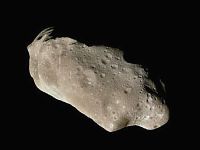 April 13, 2029 a celestial block which astronomers now call Apophis will pass by the planet at a distance of about one tenth of the distance between the Earth and the Moon. Recently, experts from the Michigan University in Ann Arbor reported that last time an asteroid approached the planet's surface at such a close distance 1,300 years ago.

Asteroid 2004 MN4, now called Apophis, is the closest one to Earth (it is situated about 30,000 km from the Earth center) and has been recently registered in catalogues as numbered 99942. Apophis is the Greek name of Apep, the Egyptian patron of darkness and death; this is a huge serpent living in the ever dark underground world and trying to destroy the Sun during its night passing. The name was given to the asteroid on July 19, 2005.

It is known that some pharaohs of the XV-XVI dynasties were named Aphophis. Today, 99942 Apophis is the only asteroid with the number and a proper name.

Astronomers are currently making observations from various observatories of the planet to define the asteroid orbit and the conditions of its approaching the planet's surface. The data obtained allows astronomers to suppose that the asteroid may hit the planet in 2029. Professor Daniel Schreerer, the head of an astrophysical group, says it is the closest ever predicted flight of a heavenly body above the Earth's surface.

Last year, researchers made a conclusion that the asteroid is one of about 600 heavenly bodies that may be actually dangerous for the planet. According to provisional data, Apophis may once again approach the planet's surface in 2035, 2036 and 2037. It is for the first time over the period of scientific observations that researchers fix the impact of terrestrial gravity upon large asteroids.

Within 2007-2012, Apophis will be passing a sector of the orbit close to the sun which will make observations problematic. That is why researchers offer to place a radio transmitter on the asteroid not later than 2013-2014.

This is some type of a free space mission, Professor Scheerer says. The researchers believe that the Earth's attractive force and the gravitation inside and on the surface of the asteroid may end in self-destruction of the heavenly body. Watching it with telescopes and other devices allows to examine the asteroid's inner structure and get all necessary information in case it may ever threaten to hit the  planet.

There are areas of about 600 meters in diameter which are attractive for asteroids because of the gravitation powers distribution in the Solar system; when passing these areas, asteroids may slightly change the orbit. For the trajectory of Apophis' flight above the Earth in 2029, the area of deviation makes up several thousand of kilometers in every direction. Astronomers state there are three keyholes within this corridor which will change the asteroid trajectory and even make the chance of a clash even more probable in 2036.

The asteroid is too small to destroy the life on the planet. However, its clash with some part of Earth may bring serious destruction there. American specialists estimated that such a collision may entail destruction to the sum of $400 billion and numerous casualties. Apophis can be seen over  the territories of Europe, Africa and Western Asia at night in 2029.

NASA experts are going to make a nuclear rocket to destroy or considerably change the asteroid trajectory. It has been estimated  that if an intercept mission is sent to Apophis before 2029, it is enough to shift the asteroid trajectory by 800 meters to avert a collision with Earth in 2036. If later, the Apophis trajectory must be shifted by 13 thousand kilometers which is a hard task for modern technologies indeed. That is why NASA is currently working on marking the asteroid with a radio transmitter.