History of modern television started in Russia in 1900

The globally recognized word 'television' was invented by Russian scientist

The word 'television' was invented by Russian engineer Konstantin Persky. The new term sounded for the first time on 18 August 1900, when the scientist delivered a speech at the IV International Electrotechnical Congress in Paris. The new word took roots, went into everyday use of millions of people worldwide and became an internationally recognizable word on planet Earth. 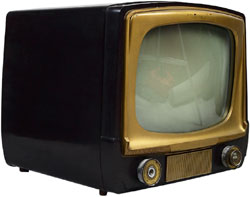 The above-mentioned Electrotechnical Congress was held within the framework of the World Paris Exposition, which was devoted to the start of the new century. Konstantin Persky, a cadet corps teacher from St.Petersburg, was reading out his report about the distanced vision. The report was prepared in English, and the scientist used a new word, 'television,' in a French manner. This detail misled several Western historians, who were led to believe that the term 'television' originated from a French man, Persky by name. If the Russian scientist had not uttered this word during his speech, people would have adopted 'remote-vision' or 'electronic telescopy' instead.

Mr. Perky received the patent for the first-ever image transmission in December of 1899. When in Paris, the scientist presented his views of television projections, devices and various opportunities to make the dream come true. That was the moment, when mankind stepped into the era of television.

Konstantin Persky came from an ancient noble clan, the founder of which left Persia to serve to Grand Duke Dmitry Donsky. Konstantin Persky was a prominent person in the scientific life of St.Petersburg. He was a member of the Russian Technical Society and the academic secretary of the Electrotechnical Society. At the end of 1899 he conducted a research to study the phenomenon of remote electronic vision, or telesight. Persky, however, specialized in defensive devices: in 1893 he was decorated with a bronze medal of the Russian Technical Society for the design of a “security device preventing illegal penetration into premises.” Konstantin Persky died in 1906.

It is generally believed that it was the USA, which contributed most in the creation of modern television. American specialists, however, acknowledge that the history of television started in Russia. Scientist Vladimir Zworykin, a Russian American, was the first specialist to invent television transmitting tubes, the iconoscope and the kinescope. It is noteworthy that Zworykin's research works became possible owing to David Sarnoff's financial support (Mr. Sarnoff was of Russian origin too).

One of the inventors of television, Boris Rosing, rests in peace in the Russian city of Arkhangelsk. Rosing worked for the St.Petersburg Technological Institute at the end of the 19th century. Boris Rosing was rather enthusiastic about the idea to transmit colorful image over long distances. In 1907 the scientist unveiled his first electronic test model of television. The triumphant breakthrough was achieved later, though:  On 9 May 1911 Boris Rosing received an elementary image on the screen of his primitive TV set: four white stripes against the black background. The scientist's name became famous immediately.

Marking Rosing's achievements in the field of electronic telescopy, the Russian Technical Society decorated the scientist with a gold medal and awarded the Carl Siemens Prize to him. It is noteworthy that the above-mentioned Vladimir Zworykin worked as Boris Rosing's assistant. Zworykin earned his name afterwards, when he immigrated to the USA, developed the iconoscope, the world's first transmitting camera and finally became the president of the RCA Corporation, a major American electronics and broadcasting conglomerate.

Boris Rosing's fate was a lot more dramatic. The scientist worked as an expert of television affairs in Soviet Russia for several years, but was subjected to repressions in 1931. Rosing was arrested and exiled to Russia's northern regions without a right to continue his work. A lot of Soviet and foreign scientists did their best to help the expelled engineer: the Soviet government eventually succumbed to pressure and reinstated the scientist at a local research institute. Boris Rosing died of brain hemorrhage in the spring of 1933. His name can now be found in textbooks next to such names as Alexander Popov, the radio inventor, and physicist Alexander Stoletov.