Cyborgs may become the reality of tomorrow

Psychologist Doctor Frank E. Pollick thinks that people will accept machines when they begin to grow up side by side with them. Today, one cannot predict how this adaptation will proceed. “By the end of 2050, robots are expected to perform various functions including cleaning the house, processing documents in the office, nursing hospital patients, entertaining people and performing risky tasks,” the psychologist states. 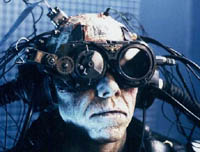 Cyborgs may become the reality of tomorrow

Professor Hoking said in an interview to Germany ’s Focus magazine that in the nearest future computer technologies would exceed abilities of the human mind. Unlike human beings, computers double their performance capabilities every 18 months. So, it is not ruled out that computers can develop an artificial intellect and seize the world, the professor warns.

Professor Hoking states that genetic engineering is the new way for mankind development. He believes that it provides opportunities for creating a superman with the brain volume and intellect much higher than the standard characteristics typical of the modern human. The professor says for this purpose special systems must be developed to establish a direct connection between the human brain and the computer ‘to make an artificial intellect serve the human being but not oppose itself to him’.

Besides, experts also emphasize that experiments on establishing a direct connection between a human organism and a computer may help make the living of disabled people easier. If researchers manage to make nerve impulses operate electronics this will mean a new era in production of artificial limbs!

Canadian Professor Steve Mann has been an absolute cyborg for over 20 years. He is on a constant connection to a computer; several sensors are implanted under his skin, and the professor wears spectacles with an embedded display. Steve is the tester of new developments in the sphere of wearable computers. The computer gives Mann a wonderful opportunity not to see annoying billboards in the street. The machine scans billboards and replaces them with publications that may be interesting and useful for Steve. Steve’s computer may also identify people’s faces and displays important information in case the computer memory keeps an image corresponding to the person. So, Mann now is a part of his own system.

Another researcher, Cybernetics Professor Kevin Warwick also wants to be in cyborg’s shoes. Surgeons created a connection between his nervous system and a computer. They implanted a small silicone square into the professor’s left wrist. The sensor contains 100 electrodes each as thin as a hair. Information from the sensor goes to a receiver that transmits wireless ‘messages’ of the nervous system to a computer located in a research laboratory of an Oxford clinic. Coded signals of movements such as finger stirs, or such sensations as shock or pain were recorded for the first time over the whole history of mankind.

Researchers believe that the experiment may cause a revolution in treatment of paralyzed patients having spinal cord traumas.