Soviet cosmonauts endured many hardships during their training on Earth

Georgi Grechko became part of the Soviet team of cosmonauts in 1966. He completed three space missions

Cosmonaut pilot of the USSR, two-time Hero of the Soviet Union Georgi Mikhailovich Grechko, the man who took a few spacewalks, shared his experience of everyday life in space. According to him, cosmonauts' everyday life is full of  hardship both on Earth and in space. 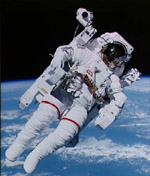 Georgi Grechko became part of the Soviet team of cosmonauts in 1966. He completed three space missions (in 1975, 1977, and 1985). Mr. Grechko says that the vestibular apparatus tests which cosmonauts had to take during the selection procedures were the hardest experience. The future space conquerors were required to sway for 15 minutes in a swing. The seat of the swing was rotating during the test. Moreover, the doctors told the cosmonauts to turn theirs heads around while swinging. And the cosmonauts could not see anything because they wore black wraparound glasses throughout the test. “I felt as if I've been thrown out of the seat and my life will end momentarily when I hit that wall,” says Mr. Grechko.

The test was the most difficult ordeal during the selection and space missions alike because even the selected ones felt bad, some felt really bad while in space. According to Mr. Grechko, when a cosmonaut is on his own taking a spacewalk, he feels like he has been turned upside down. He feels seasick after spending a few minutes in open space. And then he feels blood rushing to his head. There is a state of equilibrium between the g-force rushing blood to the legs and the elasticity of blood vessels which send the blood back when man is on Earth. Blood begins to rush to the head in zero-gravity conditions. Man in space feels blood rushing to his head all the time, but he gets used to the condition as time goes by. So if you want to feel like a cosmonaut on the first hour of a space mission – ask  your friends to hang you by the legs under the ceiling. Then wait for a while until blood gets into your head. You might as well ask your friends to move you around and make you sway while you are hanging upside down. Thus you will be able to feel the way we did during our first few hours in space. Notwithstanding the way we felt, we would hear Mission Control report that all systems were in order and the crew was fine.

Coming back to Earth is the most dangerous phase of a space mission. Should the engine fail to ignite after the descent program activation, a crew will never get back to Earth. You simply can not jump off the space ship. After the ignition takes place, the engine should work off a total impulse otherwise a crew will complete the descent in a week or month. There will be no air left on board the ship by that time. For example, the engine stopped running during the descent of the joint Soviet-Bulgarian crew. The crew would fire the engine but it would die away after running for a few seconds. There was a standby engine on board but its circuits happened to be damaged by the faulty main engine. It was a miracle that they somehow managed to land the ship. The Russian cosmonaut Vladimir Rukovishnikov first thought that his Bulgarian crewmate Kakayev had no idea what was going on during the descent. The Bulgarian played it cool and did everything right under the circumstances. However, he was aware of the emergency. He just managed to maintain his self-control. When they finally landed, he climbed out of the ship and stretched himself on the ground facedown. He lay in that position for a long time.

It feels even harder during the reentry, you begin to feel the g-load rising. The g-load is not so big during a regular gliding descent. It feels like four persons standing on your body. You think you can handle it but you body is too frail after the long-term flight so it feels like six guys standing on your poor frame. On several occasions the space ship suddenly broke into a ballistic descent due to technical problems. The ship began to spiral down and as the g-load was soaring fast up to 8g. It felt like g10 or g11 when the mission was over.

Some cosmonauts managed to survive the emergency fights with g23. Those guys stayed alive but they could not see anything, they could not breathe for a while. One of the guys even had a temporary heart failure, his heart stopped beating for a few seconds due to enormous g-load. As far as I am concerned, descent is a very hard experience both for your body and your mind. Imagination is running wild as you watch the fiery monster on the other side of the window. You can relax a little when the parachute unfolds and search and rescue helicopters call you name on the air. But things can go wrong and your parachute fails to unfold properly. Vladimir Komarov died because his lander's parachute did not open well. The cosmonaut died on impact. You can breathe easy when you hear the chopper's captain say that he can see you and your parachute looks alright. It means you have good chances to get back to Earth. Your landing may be wet or rough, it actually does not matter.

In conclusion, Georgi Grechko says that the stories may look funny when you recall them in a normal, comfortable environment. They do not look funny at all when they become part of your personal experience.