NASA awarded a $7.5 billion dollar contract to build a manned spaceship to Lockheed Martin Corporation. The Orion crew exploration vehicle is supposed to replace the space shuttle fleet. The new spaceship is expected to start taking astronauts to the International Space Station in 2014. It should fly to the Moon in 2020. The Orion will look more like the Russian-made Soyuz booster than the space shuttle Discovery or space shuttle Atlantis. 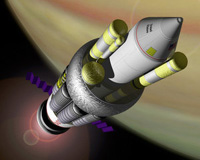 NASA seems to be pretty weary of a decade of the space shuttle, the very spaceship the Americans have admired so much all those years. The crews of two space shuttles have already perished in the missions that went wrong, too many emergency situations occur during the flight, and the space shuttle’s dependence on weather conditions results in frequent postponements of the launch. Finally, NASA looks set to replace the space shuttle with a new space ship. The space agency opted to benefit from a design and technology approach similar to that used for the development of the Russian Soyuz and U.S. Apollo. Michael Griffin, head of NASA, called the new spaceship “Apollo on steroids” while announcing the results of the bid.

Boeing and Northrop Grumman, two major U.S. aviation and space equipment companies also bid for the contract yet it was awarded to Lockheed Martin Corp. Lockheed Martin Corporation, an advanced technology company, is a giant player in the U.S. military-industrial complex, the world’s largest military contractor. However, the company has not won any manned spaceship contracts until recently. The ill-fated spaceplane contract, which was awarded by NASA to Lockheed Martin Corp. in 1996, was the only exception. NASA spent about one billion dollars on the project. The ship, dubbed X-33, never got built because of technical problems. Lockheed Martin specialized in building unmanned space vehicles, which continue to astonish experts both in terms of scientific results and nonpareil reliability demonstrated during the long years of outer space missions. The company’s latest projects include Lunar Prospector and Mars Reconnaissance Orbiter.

The Orion crew exploration vehicle will not resemble an aircraft. The Orion will not glide while landing, it will descend by parachute. No doubt about it, the new spaceship will carry no external fuel tanks – a source of trouble which ruined the space shuttle Columbia and might have destroyed the space shuttle Discovery. Some components of the Orion’s first stage can be reused for further launches, and therefore the ship is, to a certain extent, a reusable space vehicle. The ship will be primarily used for the missions to the ISS. It is also supposed to take astronauts to the Moon and perhaps on to Mars in line with President Bush’s ambitious space program aimed at colonization of nearest heavenly bodies.

The first manned mission is slated for 2014. The Orion should be ready to fly to the Moon in 2020, the deadline specifically mentioned by President Bush in his space program. NASA is expected to spend $7.5 billion on the project by that year. The Orion will be launched using a new booster dubbed Ares, which is yet to be built.

The Orion will resemble the Soyuz when it comes to the latter’s relative simplicity in terms of design. Rocket designers learned by experience that complex technical solutions could undermine the safety of space equipment. The Orion will be the first U.S.-made manned ship to be equipped with a launch emergency rescue system, which automatically activates a crew ejection in case of emergency.

In the meantime, Nikolai Sevastianov, designer general of the Russian Space Corporation Energia said that his company was working on a modernized version of the Soyuz. According to Sevastianov, the modernized Soyuz should be ready to fly around the Moon by the year 2011. The ship will be equipped with reinforced heat insulation. The upgraded Soyuz will be capable of lifting a heavier payload to orbit. Some new on-board systems will be mounted on the ship. The systems will be subsequently used on Kliper, the next-generation reusable space vehicle. A heavier payload and much thicker heat insulation on the modernized Soyuz have to do with a higher speed at which the ship will move during reentry. The new Soyuz is planned to enter service in 2010.