Many studies were aimed at drawing parallels between human beings and animals. And plenty of such parallels were drawn. The most recent study showed that men use their voice much like dogs to show their dominance. 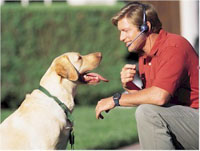 A male dog will whine and beg in deference to a stronger dog, but will lower its voice into a guttural growl if it thinks it has a fighting chance.

A new study finds that the lower the pitch of a man's voice, the more physically dominant other men think he is. And men lower their voice pitch when addressing a man they believe to be less dominant than themselves, but raise it when speaking to someone they think is more dominant.

The findings, detailed in the July issue of the journal of Evolution and Human Behavior, could help explain why vocal pitch in men and women are so different.

Vocal pitch, determined by the main frequencies in a voice, is about half as high in men as in women. This difference has traditionally been explained as a product of sexual selection, in which women favored men with lower-pitched voices.

One reason women might prefer men who speak in low voices is that vocal pitch is partly related to physical size. Taller men tend to have lower voices because they have longer vocal tracts and vocal folds, the main determinants of pitch.

Vocal anatomy is also thought to signal a man's level of testosterone, a hormone linked to physical aggressiveness and prowess.

Studies have shown that women favor men with low, masculine voices during periods in their menstrual cycle when they're likely to get pregnant, and also that they prefer men with lower voices for short-term sexual flings.

In the new study, 111 male university students took part in what they thought was a competition against another guy for a date with an attractive female student. The participants were asked to rate social and physical dominance of themselves and a competitor.

All the male participants faced the same competitor, whose voice was recorded but who was not actually present during the experiment.

To get a baseline reading of their voices, participants were first asked to read a passage aloud. They then had to respond to the competitor after listening to him give reasons why he thought other men respected or admired him.

Like whining in dogs, a man's raising of pitch to a physically dominant man is probably an unconscious way of showing deference, said study leader David Puts of the University of Pittsburgh in Pennsylvania .

Men could fake it and lower their pitch to appear more dominant than they really are, but if someone calls their bluff in a real-world situation, the consequences could be severe.

"If you advertise dominance and can't back it up, the attacks may be worse than if you had avoided the fight to begin with," Puts told LiveScience.