Searching for “green aliens” on other planets, scientists have sent a variety of signals and messages into space, including even music recordings and photographs

On behalf of the Church the Pope apologized for the persecution of Galileo Galilei. He did not apologize for another scientist, Giordano Bruno, who had to suffer a public execution on fire in the year 1600. The Church accused the erudite monk of many sins: Bruno's unshakable belief in other inhabitant worlds was one of the biggest of them. The sad life of the forefather of the “green aliens” idea did not scare anyone off, though. Modern scientists continue Bruno's heroic initiative: the subject is still rather relevant in the scientific world. Furthermore, researchers try to think of new ways to search for extraterrestrial beings in the Universe. 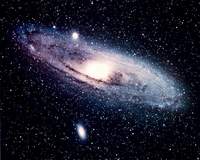 French astronomer Luke Arnold has made a considerable contribution to the SETI problem recently – the Search for Extra-Terrestrial Intelligence. Scientists traditionally search for artificial electromagnetic signals or send their own signs into space. Soviet scientists sent out their first space signal on November 19th, 1962. The signal itself looked like a historical joke: the researchers sent only three words in the Morse code – “Peace, Lenin, USSR.” They apparently believed that aliens knew the Morse alphabet by heart.

US citizen Frank Drake, the founder of SETI, became the first person to have sent the scientifically valuable signal in 1974 in his quest for extraterrestrial civilizations. The American scientist encoded elementary mathematical formulae in the binary-number system.

Scientists have sent a plenty of various space messages since that time, but they have never received anything in response yet. The idea of the above-mentioned French astronomer is different, though. Arnold put forward a suggestion, which said that the search for electromagnetic signals in the Universe was a wrong conception to follow. The astronomer said that people should search for something that extraterrestrial beings leave as a result of their activities. The more successful and developed a civilization is, the more energy it needs. The energy of the sun seems to be the best way out of the situation. According to Arnold, there should be giant solar sails somewhere in the Universe, or any other impressive non-spherical (meaning artificially-made) objects.

It is possible to discover non-spherical objects in space: they alter the radiation of a star as they screen its light. The endeavor could probably be a success, although it requires orbital telescopes of the new generation. NASA plans to launch the new class of telescopes into orbit in 2006 – SIM, or the Space Interferometry Mission. Kepler and Terrestrial Planet Finder (TPF) telescopes are to be launched in 2015. The plans of the European Space Agency include the COROT satellite - COnvection, ROtation and Planetary Transits. The spacecraft is to be launched during the coming several years.

Astronomers of the Texas University suggested another method of searching for earth-type planets. The method is connected with the search for systems that appear after the formation of a white dwarf star. Our Sun will inevitably suffer a similar fate in remote future. As the Sun starts quenching, it will absorb Mercury and Venus, but will not reach Earth. White dwarf stars have an extremely precise brightness-changing periodicity, which is even higher than the atomic clock.

Humans still do not have an answer to the question of extraterrestrial reasonable life on other planets. The scientific quest still continues, though. Reasonable life exists somewhere in the Universe, from the logical point of view: Earth simply cannot be the only living planet.

Nobel Prize winners Francis Crick, who discovered the DNA and Charles Townes, the inventor of laser, also studied the SETI problem. There are enough interested scientists in Russia too, including outstanding academicians. The academic status proves that the SETI problem is highly relevant: academicians would never put their authority and prestige to shame otherwise.

Searching for life on other planets, scientists use even most primitive methods as well, sending out “bottled messages” in space. A lot of spacecrafts were outfitted with plates containing the information about the human civilization on Earth. Such messages included a variety of photographs and music recordings, from classic to folklore selections, as well as sounds of human voices, animal screams, etc.