Giant asteroid to fly Earth by in 2029, mammoth collision is quite possible

A giant asteroid, which is to fly past Earth in 2029, may strike the planet several years later. Astronomers calculated that the asteroid called 2004 MN4, 1000 feet in diameter, would fly past the planet at the range of only 15-25 thousand miles. The distance is equal to one-tenth of the distance between the Earth and the Moon. One will be able to observe the celestial body with unaided eye. 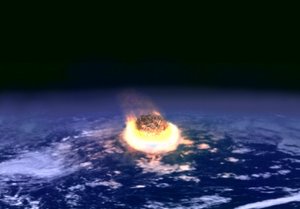 Scientists are certain that the asteroid will only fly Earth past, although they are quite concerned about the influence that it will have on the planet. The Earth's gravity may change the orbit of the celestial body, which, in its turn, might eventually result in the collision of 2004 MN4 with Earth already in 2034 or two or three years later.

Experts suggest marking the asteroid with a transponder, which will constantly be providing information about its whereabouts. Scientists hope that it will help take urgent measures in case of a state of emergency and redirect the space object away from Earth.

Scientist also want to obtain information about the composition of the asteroid. They believe that the chemical structure of the asteroid might be connected with the influence that the Earth's gravity will exert on it. In addition, the asteroid will near Earth again in 2034 and 2035.

The 2004 MN4 is big enough to cause planet Earth the damage of regional scale. If it hits the planet, the impact will be comparable to the blast of a 1,000-megaton bomb. The asteroid was discovered in June of 2004; the calculation of its orbit will be completed in December of the current year. Astronomers calculated at first that chances for the asteroid to hit planet Earth on 13 April 2029 would be estimated at 1 to 38. Additional computations showed, however, that Earth will avoid the collision with the asteroid, although it will fly very close to the planet: the asteroid's trajectory will be lower than the altitude of television satellites. People will be able to observe the celestial body as a fast-moving luminous dot.