A spaceship carrying a crew of three, namely Sergei Krikalev, John Phillips, and Roberto Vittori, will take off on April 15th, 2005, from the Baikonur spaceport. The crew will relieve the current crew on board the International Space Station. Mr. Krikalev and Mr. Philips are expected to handle the arrival of Discovery to the space station in mid-May on the first shuttle flight since the Columbia tragedy. The best astronauts of the USA and Russia were handpicked for the new important mission to the ISS. 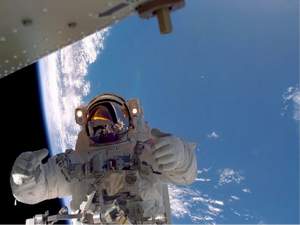 Vladimir Krikalev, 47, is considered a second-to-none ace and veteran of Russian cosmonauts. His first mission to space took place in 1988. The new mission will be his sixth. He took 7 spacewalks, was part of the 2 long-term missions, one on board the Russian Mir Station and the other one on board the ISS. He was involved in docking operations in space. During one of his missions, Vladimir Krikalev managed to fix a delicate onboard computer that went out of order. In total he spent 624 days in space. He does not fly spaceships exclusively. He is also a skillful pilot with a long track record in aerobatics both in Russia and abroad.

John Phillips, an American citizen, is 54 years old. He was educated in the Naval Academy where he earned his bachelor's degree in Mathematics and Russian language. He served in the US Air Force. Mr. Phillips pursued a scientific career after his retirement. He held posts at the famous Los Alamos Laboratory. He has a doctorate in Geophysics and Space Studies. He conducted numerous research projects on solar wind and cosmic plasma.

Roberto Vittori is from Italy. He will be traveling to the ISS for the second time. On board the station he will conduct a series of scientific experiments including a research on the effects of space radiation on earthquakes. The research program also includes an experiment involving 200 fresh-water ciliary worms that will be carried to the station in a vacuum bottle. According to the Institute of Medical and Biological Studies of the Russian Academy of  Sciences, the worms are thought to be the best material to study the regeneration of  tissues.