Lord of the storms ready to fight tornados and floods worldwide

Pensioner Nikolay Ukolov from the settlement of Mordovo in Russia’s Tambov Region possesses a unique talent for ruling the nature. The man has mastered the art of dispersing clouds and evoking rains. And now the pensioner wants to gain practice with stopping floods and storms. 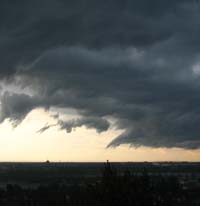 Lord of the storms ready to fight tornados and floods worldwide

Everybody in the settlement of Mordovo knows Nikkolay Ukolov very well. At that, many villagers are rather skeptical about the man’s talent in ruling the nature. However, when some family in the settlement celebrates an occasion, like wedding for example, and suddenly rain breaks out, people always ask Nikolay to help stop the rain.

The pensioner’s neighbor Polina several times witnessed how Nikolay dispersed clouds: the man whispered some words, gesticulated for some time and suddenly the clouds disappeared. The woman says that the local ‘weather forecaster’ can forecast the weather for an entire season. “Last autumn, he said the coming winter would be cold and it would be snowing heavy. And the forecast turned out to be true,” the neighbor adds.

Nikolay calls himself ‘a prophet, healer and foreteller’. For the first time the man revealed the unique talent twelve years ago after he had a vision of the Blessed Virgin in his sleep. “The Blessed Virgin was holding a baby in her hands, and a column of red light was looming behind them. I felt at once that the dream was prophetic,” Nikolay tells.

Once, the head of the regional administration asked Nikolay to provide good weather for the entire harvesting campaign. The foreteller kept his word, and the weather was fine indeed. As a payment for the unique service Nikolay got one and a half ton of grain and three bags of sugar.

Last autumn, Nikolay decided to apply his talent on a larger scale. When Russian weather forecasters predicted the coming winter would be incredibly warm, the man made a decision to put much frost on the country. Now he admits that he went too far with the task, and last winter was incredibly cold. The pensioner says it was his only failure and usually his talent works for other people’s good only.

‘The Master of the Weather’ cherishes the dream of ruling floods and tornado. He wants to offer his services to Russia’s EMERCOM Minister Sergey Shoigu. The pensioner is sure that he can wonderfully deal with natural disasters in the whole of Russia.

The other day, Nikolay Ukolov published a weather forecast for the coming summer. He promises the hottest summer temperature will reach 38 centigrade degrees above zero, at that the country will gather the worst over the past ten years harvest. However, the pensioner adds that if people believe in his talents he may help make the weather better.

It is difficult to say if the man actually possesses some unique talent or his forecasts and ‘sorcery’ are mere coincidence. It takes the old man several hours to clear clouds off the sky, and it is impossible to say whether the weather changed for the better itself or as a result of the man’s ‘sorcery’.