US secret archives contain records of encounters with winged humans

Rumors about the “flying beings” have been circulating around the globe from time immemorial. Almost every nation’s fairy tales have a description of a winged creature that looks like a human being. It was not until a few years ago that researchers in different parts of the world began trying harder to crack the mystery of the flying creatures. 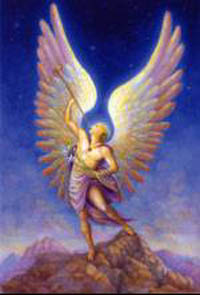 US secret archives contain records of encounters with winged humans

American researchers became the first ones to show interest in the “flying humanoids.” The U.S. Air Force archives keep a report on an UFO filed by one William S. Lamb from Nebraska. Mr. Lamb was on a hunting trip near Hewbell at 5 a.m. on February 22, 1922. Suddenly he heard a strange high-pitched sound coming from above. Mr. Lamb looked up and saw a big dark object flying in the sky. Then it landed just like an airplane and started walking across the snow. The stranger was at least eight foot high. Mr. Lamb tried to follow the footprints but exhausted himself trudging through the deep snow.

The archives also keep similar records about several amazing encounters that took place near the small town of Point Pleasant.

On November 15, 1966, two young family couples, the residents of Point Pleasant, went astray while riding on a car to the country to see their friends. Dusk was falling as they were driving past an old mill. All of a sudden one of the women began staring open-mouthed at two red circles that shone brightly in the dark. The circles were about two inches in diameter and seemed to be hanging in the air. Then they started moving towards the car. The driver and passengers finally saw the eyes of a huge living being.

Its frame resembled that of a human but it looked a lot taller, up to six and a half to seven foot. And it had a pair of wings folded behind the back.

The big red eyes seemed to be hypnotizing the riders, everybody was sitting still for a minute or two unable to look away. Then somebody cried out: “Let’s get out of here!” and the driver stepped on it. The car was crossing the top of a hill as the passengers saw another winged creature hovering above the trees. It spread the wings and flew straight up the sky as the car was rolling at a hundred miles per hour.

Thomas Uri, a young salesman from Point Pleasant, was driving his car on early morning of November 25, 1966. Thomas then saw a tall humanlike form standing in the field nearby. Suddenly, the creature unfolded the wings and rose vertically into the sky like a helicopter. It was flying above the car for a while, never falling behind though the car was running at 75 miles per hour.

It is quite noteworthy that an indescribable fear filled all the residents of Point Pleasant who saw the flying monster.

A similar flying creature was seen about the same time in the vicinity of the town of New Haven in West Virginia.

Connie, a 18-year-old resident of the above town, was driving back home after a Sunday church service. She was driving past a derelict golf course when a big grey figure, at least seven foot high, emerged at the roadside. However, it was not the height of the creature that caught Connie’s eye. The girl was virtually mesmerized by the two big eyes, they were red and shone brightly. All of a sudden the creature spread its wings and it lifted up slowly, without making a sound. The flying thing did not flap the wings during the flight.

Four lads were walking back home from a dance near Standling Park in Kent, the United Kingdom, on November 16, 1963. They suddenly heard a crackling of the branches and along came a black behemoth. It had a pair of bat-like wings.

A similar creature was seen in the village of Nagorye, in central Russia, in the September of 1979. It was dusk when a student took a girl on a date in the field. The sun was sinking fast. The student was called Igor Kuleshov. He was in the middle of the date when he saw some dark object flying slowly above the ground at about 30 meters. Igor went speechless as the object moved closer and took shape of a human wearing some kind of a shining armor like a knight of the Middle Ages. There was a pale halo around the flying man. He flew right above the astounded couple and vanished in the direction of a forest. They could also hear something resembling a rustle of the leaves on the wind.

U.S. researchers put forth two theories as to the origins of the “flying beings.” According to the first theory, the military conducted a series of experiments involving residents of the areas near secret military installations. The experiments had to do with a mind-control research program, which allegedly involved the use of electronic signals to produce same-kind hallucinations. The second theory maintains that the winged creatures do exist. Their origins remain pretty murky and unearthly, though. The creatures turn up in our dimension once in a while only to disappear without a trace in another dimension.