Nautiluses and ammonites are numerous in Moscow metro

The Moscow metro can be visited as a museum of paleontology

The Moscow metro will celebrate 70 years in 2005. It is considered to be one of the most beautiful metros in the world. People often compare it to a large museum, but they mean the unique architecture of metro stations, columns, statues and stained glass-adorned halls. There are hardly any people, who know that the Moscow metro is also a 'museum' of paleontology. 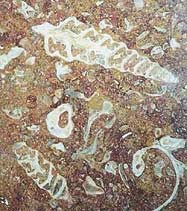 Millions of people ride the Moscow metro every day. As a rule, people always hurry somewhere, they do not pay any attention to the underground beauty. Some patterns that can be seen on the walls, ceilings and floors of metro stations are often of historical value. One may find there fossils of creatures that lived on the planet during the era of dinosaurs.

Riding the Moscow metro, students of the ecological department incidentally saw a fossilized nautilus, the shellfish. After such an unexpected discovery, students have found a lot of other specimen in the metro. One may see wonderful ammonite shells, sea lilies and other fossils of prehistoric animals. Metro passengers usually take them for white spots and dots. For the time being, students have found interesting fossils at 20 stations of the Moscow metro.

Unfortunately, clearly visible shells are not numerous. The majority of ammonites and nautiluses are hidden inside stones. Only a few of them can be seen on the cut-section. There are several perfect specimens, though, fossilized without any deformation.

Metro fossils are hundreds of millions years of age. As a rule, they have been preserved since the Jurassic period of the Age of Reptiles and the Paleozoic era. Nautiluses and ammonites are especially beautiful and interesting. Sea lilies, bivalve molluscs, corals can also be found on metro stations. Paleontologists may see worms' tracks in ancient stones too. They look like stripes on stones – only a professional can see them. However, the beauty of an ammonite shell does not require the encyclopedic knowledge of prehistoric eras. The shells are up to 70 centimeters in diameter, some of them are shaped perfectly.

A beautiful nautilus in red marble can be seen on the Dobryninskaya circle line station. The shell is cut perfectly, one can see every internal partition. Clusters of sea lilies attract attention too. As a rule, they are small parts of long stems, reminiscent of small white stars. The fossils are 180 million years; they are the fauna of the Jurassic period.

Large shells of gasteropod molluscs are seen on the Biblioteka Imeni Lenina station. The shells are 300 million years old, of the coal period. There are bivalve molluscs on Komsomolskaya, Park Kultury stations. A lot of shells are fossilized in the columns of the Ploschad Revolutsii station. They are rudist molluscs resembling solitary corals. Corals of the coal period can be seen on the floor of the Elektrozavodskaya station.

In general, fossilized fauna can be found on old stations, because they were faced with natural rocks. Concrete or tiled walls of the stations built in the 1970s and 1980s are of no historical interest. However, the newest stations of the Moscow metro have been faced with natural rocks again. The Park Pobedy station was opened last year. It turned out to be the most unusual station from the paleontological point of view. Ammonites can be found in almost every column of the station, the walls of which are faced with orange stone. They are the largest ammonites of the Moscow metro: some shells are 70 centimeters in diameter. There are several belemnites there as well: they are rather small, but the grey-white shell color makes them clearly visible against the background of orange walls.