Without any need, fifty-six billion animals are murdered each and every year, often after suffering deplorable conditions, held captive in restricted and filthy living space, stuffed full of antibiotics and growth hormones, before being slaughtered, often in shockingly cruel circumstances, the process dangerous for the environment and the meat a health hazard. 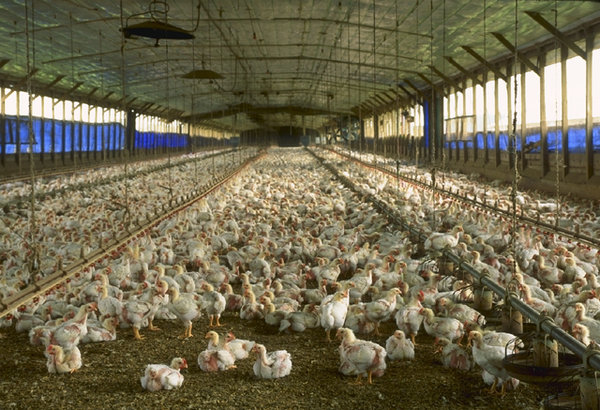 It is by now crystal clear that humankind only acts out of selfish motives and in self-interest, so to argue the case that fifty-six billion animals are murdered every year to provide meat for our tables, a quantity that is totally unnecessary, to claim that in many cases the animals themselves are held in disgusting, filthy conditions, subjected to abject cruelty and slaughtered without any shred of consideration, cuts no ice with the majority. One or two might lift an eyelid, another may shrug but mostly they will carry on munching like cows chewing the cud ten meters away from a fatal minibus crash in which twelve children lost their lives, as if nothing had happened. Perhaps for the cows it was great news. Humankind, as a species, couldn't give a flying toss.

So let us put it another way. The mass production of meat on a global industrial scale is not only a tremendous health hazard for the human species but also, is extensively damaging for the environment, destroying the ecosystem on the land, polluting the soil below the land, drying up our planet and contributing to a vast increase in GEG (Greenhouse Effect Gases). Meat ain't sexy.

Now a few heads have turned at the mention of the S-word, I might garner a few seconds of interest before they slouch back into their putrid, egotistical nonchalance. OK think of a lunar landscape, or a Martian one. Barren, dry, parched,sand particles blown by the wind, no vegetation in sight, the only signs of life being fossils and stones and skeletons of beings that used to roam the grasslands under blue skies and among freshwater lakes, bathed by salty, vibrant seas inhabited by creatures of all shapes and sizes.

I have just painted you a picture of Planet Earth in the not so distant future. Now look at a map of your nearest city, or capital city. In many of them, the main arteries you travel along today used to be rivers, some bearing the same name. In the People's Republic of China, recently, 28,000 rivers have disappeared, over the last century, across the world and in all continents, great lakes holding billions of liters of water have vanished, turning into dustbowls.This is not cloud cuckoo land, it is happening around us.

Quite apart from the disgusting mess we have made of the air, land and sea, with toxic waste seeping out of canisters deep below the ocean, or leaking down into our soils to contaminate them for centuries or millennia to come, quite apart from the plastic now choking our oceans, we are committing a hands-on, purposeful and wholly unnecessary environmental crime - livestock farming to place meat on our tables.

Exceptions to the rule

There are places that rear animals in a humane way, feeding them natural foodstuffs, allowing them to roam around freely, being loved and stroked (whether they like it or not), some of them even having names, before the day comes when they are killed, or murdered, painlessly and with respect, their meat forming an important part, but not whole, of a human's diet. In prehistoric times, even in classical times, such places would have been the norm. Today, they are very much the exception.

I do not need to point out that there are battery farms in which chickens are force-fed twenty-four hours a day, including antibiotics and hormones to make them grow faster and reach adulthood in a fraction of the time it would normally take under natural conditions, hens are forced to lay three times more eggs than their system is designed to lay, being forced to refeed on their own dried-up excrement. Enjoy your chickenburger, Johnny. From battery farms for chickens to gestation crates for pigs, held in boxes in giant warehouses, unable to walk, allowed merely to eat, grow and defecate on concrete floors, unable to sweat to cool themselves. From gestation crates for pigs to feedlots for cattle, where, again, they are fed with synthetic products charged with vitamins and hormones and antibiotics.

Let us invert the roles, and let me take you to the protein processing plant. It is a nice, airy building, modern yet simple. Now if you would just follow me into stall #1 here, close the gate please. Now here we have four hundred and sixty female humans being prepared for their gestation crates. As you can see, the compound allows them to squat once every four hours for their necessities, the rest of the time they are in upright position, their muscles charged with electric shocks to keep them in tone. Feeding is through the tube inserted into their mouths and down their throats, oxygen is fed through the plastic tubes sewn into their noses. Sleep is induced through a single dose of formula fed into the AC system at 19.00 sharp, wake-up time and first defecation is at Oh Seven Hundred hours. The rhythmic sound you hear in the background is a simulation of a human heart beating. It keeps them calm. Gestation has been brought forward to four and a half months through increased development science and the next generation is ready for insemination after ten years, impregnation being through the frozen semen bank stock over in Area 12. It is not a very economical species to rear, that's why the meat is so expensive. The ratio of males to females is controlled through the temperature of the sperm and genetic manipulation. Before birth, the females are moved onto Conveyor Belt 16, which takes them through the Decapitation Unit to which they are subjected about a minute before they are taken onto the Factory, known to the staff as the Mechanical Caesarian Sector, where the calves are sliced out of their uterus and placed in a rearing unit. The human calf is a disgusting, useless creature which in its natural state spends two years lying in a pool of excrement, screaming, with its arms flailing around (general laughter). After decapitation the heads are split open and the brain is extracted for protaic pulverization, after which it is fed into the feeder system, waste is at zero percent (nods of approval). The carcas is then moved on to Conveyor Belt 18 over here, if you would...thank you...and quartered, packaged in the Packaging Plant next door, then frozen and shipped out to the outlets.

"Sorry to disturb your presentation, Jack, but we have a situation in Section 4"; (a group of scientists hurries past, looking worried, to Section 4, next door). They open the communication chamber, walk through and it closes. Three seconds later the visitors hear blood-curdling screams and see massive blood splatter against the glass, spurting from the group of scientists as they launch torrents of it in projectile vomiting. "Not to worry", says Jack, "it seems we have an outbreak of the Cluster-3b140t Virus, quite common among humans. It's a multi-resistant mechanism which appeared in the early twenty-first century among human feeders of factory raised meat, the mutation ranging from 1a to 150x in a D and C axes, something like they used to classify some airborne viruses as ABC and HN combinations. The Section will be closed down now for fifty hours for incineration at 1000C and decontamination".

OK take us away from this short story, it's giving me the creeps. Can you put some music on please? OK take a seat everyone. (violins, Vivaldi's Four Seasons...wow that's better). See, we used to rear animals in natural conditions, feeding them what they needed so that they could grow naturally and we used to consume mostly roots, pulses, fruit, grains... vegetables. Bread. Occasionally, animal protein on festive days. But today we have the means to mass produce vegetable proteins as a substitute. Bottom line is, we do not need to factory farm animals on livestock farms (drum roll).

But the food lobby is powerful (Background music changes to the Star Wars Darth Vader sequence).

Conclusion: What I have just described above is a glimpse of the truth. A question: Would you let someone else force feed your child with carcinogenic-producing products? No? Then why do you? As our population grows and becomes more urbanocentric, people are leaving farms and traditional farming methods were never supposed to cater for more than a family, were never designed to be anything more than minifundia.

If you do not want to become a vegetarian, or a Vegan (which I can assure you will leave you feeling far healthier, sleeping better, performing better, yeah OK even in bed if that's what turns you on, rolleyes), then try to go back to the early human diet in which meat was consumed occasionally, and you can get there right today by reducing meat to an 80-gram portion once daily.

No, you do not have to spend your time trying to make vegetarian dishes emulate meat and no, you do not have to eat boiled cabbage and boiled carrot with a stupid expression on your face, pretending to enjoy what is boring and tasteless. Cooking is fun and recreational and educational, so involve your kids in the kitchen (with the proper care), be creative, be inventive and start off with a variety of products to make your meals interesting and nutritious.

Nice idea? More than that. It is the one shot we have to save our Planet and believe me, we are running out of time.