Deadly Marburg Virus back in Africa

The Ebola-like Marburg virus disease has appeared this week on the Uganda-Kenya border. One person is confirmed dead and several hundred are believed to have been exposed to the deadly virus, in healthcare centers and at traditional funerals. The World Health Organization is working around the clock to contain the outbreak which has a fatality rate of up to 88 per cent. 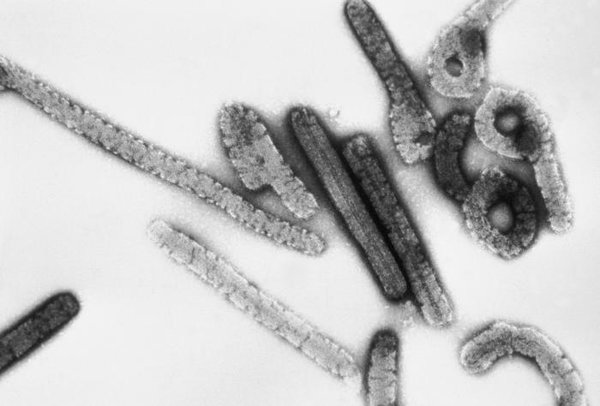 The first fatality and confirmed case is reported to have appeared exactly a week ago on October 17 - it was a 50-year-old woman who had been admitted to hospital on October 11 with fever, bleeding, vomiting and diarrhea - symptoms like Ebola virus disease, to which Marburg is related. However, the woman's brother had died three weeks earlier, of symptoms and had died of similar causes, and had been buried in a traditional funeral in which people place their hands on the body. Reports state that he was a hunter of game and had camped near a cave in which Rousettus aegyptiacus fruit bats lived - they are one vector (carrier) of the disease, being natural hosts. Margurg virus disease can remain active in semen up to seven weeks after a case has been "cured" and is asymptomatic.

WHO considers that the risk of a regional spread of the disease is high and has dispatched to the area teams of healthcare experts to help the Ugandan Health Authorities to contain the outbreak and look for cases of infected persons.

Marburg virus disease and Ebola virus disease are both caused by viruses from the Filoviridae family, one of the most virulent pathogens known to humankind. The incubation period is 2 to 21 days and the onset of symptoms is sudden fever, chills, trembling, headaches, myalgia, nausea, vomiting, diarrhea and uncontrolled bleeding. The vectors are contact with fruit bats or monkeys and it can be easily transmitted by contact with the skin or body fluids, from other infected humans. The mortality rate in previous outbreaks has been as high as 88 per cent.

There is no specific treatment for Marburg virus disease apart from treating the symptoms as they appear. Several treatments based on blood and plasma are being studied.