Scientists have created a new neurochip that can literally read the minds of those who were paralyzed as a result of car accidents or serious illnesses. 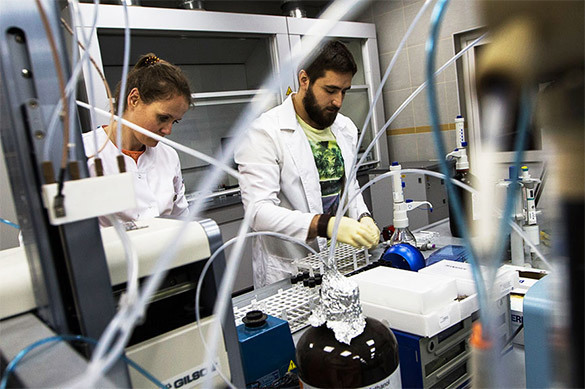 Symptoms of the "locked-in syndrome" are reminiscent of what happens to the body and brain of people in a coma or in a vegetative state. Until recently, neuroscientists believed that paralyzed individuals could not maintain mental activity, set goals and solve them.

Niels Birbaumer of the University of Tübingen (Germany) and his colleagues were experimenting with four volunteers in last stages of ALS (amyotrophic lateral sclerosis), to figure out whether it was possible to establish connection with paralyzed patients with the help of so-called neurochips and "brain-computer" interfaces - the system that directly reads brain signals and converts them into a computer-friendly language.

The article published in PLOS Biology journal says that the researchers used two devices in their study: a magnetic resonance imaging machine to observe the activity of different parts of the cortex and deep layers of the brain, and an infrared spectroscope to monitor the activity of certain groups of nerve cells by their oxygen consumption.

Earlier, another group of scientists discovered that hemoglobin concentration would vary predictably when a healthy individual answers simple questions. A 'yes' answer would raise hemoglobin levels in the brain, whereas a 'no' answer would either reduce or leave them unchanged. Following this idea, the German scientists created a program to translate such signals into 'yes' and 'no' answers.

During the experiments, paralyzed individuals would identify their wives, husbands and relatives. Patients would also answer questions about their personal life. One of the paralyzed men could even forbid his daughter to marry her boyfriend. The scientists also established that the participants of the tests were happy to live, despite their illness.

According to the scientists, the discovery will make it possible to design and develop full-fledged speech synthesizers, as well as devices that may help such patients move independently.