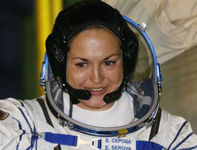 Russian manned spacecraft Soyuz TMA-14M successfully docked at the ISS on Friday, September 26. "The ship docked at the docking port of "Poisk" module in an automatic mode," ITAR-TASS reports from Baikonur.

One of the solar panels did not open when required, although it did not prevent the docking. The panel opened several hours later, the head of Roscosmos, Oleg Ostapenko told reporters.

The Soyuz delivered the crew of the next long-term mission of ISS-41/42: Russian Space Agency cosmonauts Alexander Samokutyaev and Elena Serova, as well as NASA astronaut Barry Wilmore. "All three of them are doing well," Roscosmos officials said.

Thirty-eight-year-old Elena Serova of Russia has thus become the first woman to have arrived at the ISS after a long break in 17 years. Serova has also become the fourth Russian woman in space in history. She became a member of the group in 2006 and was preparing for the space flight for a long time. Prior to that, she worked as an engineer of the second category at Russian Space Corporation Energia.

The decision to send Elena Serova into space was made in 2011. There is another Russian citizen - Anna Kikina - among the candidates.

At the opening of the Olympic Winter Games of 2014 in Sochi, Elena Serova was in the group of Soviet and Russian cosmonauts, who raised the flag of the Russian Federation.

Only three Russian females have traveled into space before. Valentina Tereshkova became the world's first female cosmonaut in 1963. In the 1980s, Svetlana Savitskaya worked in orbit twice. Savitskaya also became the first female spacewalker in the world. Elena Kondakova flew into space twice during the 1990s. Her first flight to space station Mir took place from October 4, 1994 till March 22, 1995. Kondakova flew into space for the second time on board the American ship Atlantis in 1997.

Elena Serova promised in early September that she would try to wash her hair on board the ISS in conditions of weightlessness. She promised to finish the process in five minutes.

Famous singer Sarah Brightman may become the next woman on the ISS after Serova. The British singer will start preparations for a tourist flight to the ISS in January 2015, Yuri Lonchakov, the head of the Cosmonaut Training Center, said two weeks ago. The official did not specify, when the flight was going to take place exactly.

The Russian cosmonauts and the American astronaut were delivered to the ISS in six hours. During this "short" period of transportation, the crew does not have to adapt to weightlessness inside confined space of Soyuz. The state of weightlessness begins to affect the human body in about five hours. Given the short flight period to the ISS, the crew will start to experience weightlessness already on board the ISS, in a comfortable environment.

On the ISS, the newly arrived crew received a welcome from Maxim Surayev, Gregory Wiseman and Alexander Gerst. The crew will work on board the station for about 169 days. For Soyuz commander Alexander Samokutyaev, this is the second space flight. The cosmonaut was on the ISS in 2011.

The new crew members will carry out an extensive program of research works and experiments, in which three Russian Progress rockets and European ATV spacecraft will be involved. Samokutyaev, together with Maxim Suraev, will go on a spacewalk.